American Evangelicals seem to turn a blind eye to the human rights abuses in Israel. They generally support Israel as the Holy Land promised to Abraham the Hebrew. This unexamined claim is both historically and biblically inaccurate. Abraham's territory was in the land of ancient Edom, between Hebron and Beersheba. It did not correspond to the boundaries of the modern state of Israel.
Israel justifies its continued land grab based on the erroneous claim that Jews have a special religious connection to the land. This effort to achieve legitimacy through an appeal to religion fails when examined in detail. 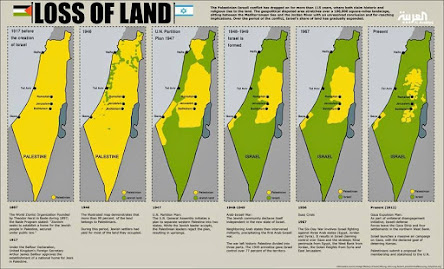 The Palestinian-Israeli conflict has gone on for more than 100 years with no end in sight.
Israeli authorities have expropriated thousands of acres of Palestinian land for settlements and their supporting infrastructure. Discriminatory burdens, including making it nearly impossible for Palestinians to obtain building permits in East Jerusalem and in the 60 percent of the West Bank under exclusive Israeli control (Area C), have effectively forced Palestinians to leave their homes or to build at the risk of seeing their “unauthorized” structures bulldozed. For decades, Israeli authorities have demolished homes on the grounds that they lacked permits, even though the law of occupation prohibits destruction of property except for military necessity, or punitively as collective punishment against families of Palestinians suspected of attacking Israelis.
The law of occupation, designed to regulate the exceptional and temporary situation in which a foreign military power displaces the lawful sovereign and rules by force, grants an occupier broad but limited powers to restrict individuals and their rights to meet security needs.
After more than 50 years of failure to rein in abuses associated with the occupation, the international community should take more active measures to hold Israeli and Palestinian authorities to their obligations under international human rights and humanitarian law. Other countries and businesses should cease activities carried out inside settlements and change policies that support settlement-related activities and infrastructure, in keeping with their respective human rights responsibilities.
Before 1948, Jerusalem was almost half Christian, now it is barely 2% due to wars, violence, and discriminatory policies practiced by the Israeli government.
Christians fail to support their fellow Christians
Ironically, the support of Israel's policies by American Evangelicals puts tremendous burden upon Christians, especially in places such as Bethlehem where they are already persecuted by the Muslim authorities.

Samir Qumsieh, director of the Catholic television station Al-Mahed Nativity TV in Bethlehem, reported in AsiaNews that "the emigration of Christians is growing, even if the authorities refuse to give precise numbers. Every day there are people who flee to other countries. As Christians, we live in a constant feeling of fear and uncertainty, and if you live in constant tension and pessimism, you cannot plan anything."

Many Palestinian Christians have immigrated to other countries where they find greater opportunities for their children. Sadly, it is possible that in the near future there may be no Christians living in the homeland of Jesus Messiah.
The Christian population of Taybeh is beginning to stabilize due to initiatives within the village that have stimulated the economy. One cause of celebration is the October Beer Festival which draws tourists from Jerusalem in spite of the many roadblocks maintained by the State of Israel. The beer is produced at Palestine's only micro-brewery.

A housing area for Jews only has been built in the area. It receives water 7 days a week while the nearly 2000 residents of Taybeh receive water only 3 days a week.

About three and a half million Palestinians live in the West Bank and Gaza, but only a small percentage are Christian. While Jews and Muslims slaughter each other the Christian minority is caught in the middle. It is trying to live in peace and to practice Christ's command to love even those who seek to harm them.
Archbishop Atallah Hannah (Orthodox Church of Sebastia) reports that, "Palestinians, Christian or Muslim, are deprived [by Israel] of visiting holy sites in Jerusalem."
Israeli expansionism punishes all Palestinians, regardless of their religion.
Related reading: Palestinian Territories - Open Doors USA
Posted by Alice C. Linsley at 2:45 PM