Hunger in the USA 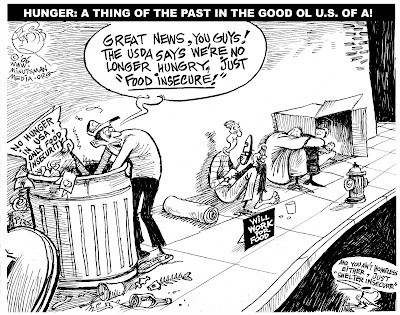 This paper provides research into the causes and supporting circumstances of hunger in the U.S. It will look at the number of people that fall into the category of food insecurity, the factors that may present a common link; socioeconomic status, environmental, race, regional, etc. The programs and corrective measures currently in place are analyzed for their effectiveness to rectify the situation. It seeks to point out the flaws in the current measures and explores a potential government lead initiative to end hunger in the U.S.

Hunger in the USA


Finding a way to bring about an end to the hunger and malnutrition that many Americans face on a daily basis should be a priority in this country. In a country of plenty we have overlooked the obvious that “world hunger” does include us. For decades, we as Americans, have been involved in providing financial aid and support to feed the starving and malnourished beyond our borders. The scale of suffering from hunger is not as dramatic in the United States as it is in many other countries. To come up with a workable solution to end hunger throughout the world, we must be able to come up with a viable solution here at home. There are many factors that are involved in creating an environment of hunger. Look at the programs or corrective measures that are currently in place to assist or rectify the situation of those that fall into this category.

In researching the statistics and data on this paper it was apparent that the numbers of those classified as experiencing hunger varied greatly from source to source. This identified another problem in tackling hunger in the U.S., being able to agree on the population to target for relief. So how is hunger defined in the U.S.? The USDA defines hunger as food security and food insecurity. Hunger is not measured by the USDA because it is a subjective experience that varies from an individual experience. The USDA established the definitions for food security in 2006 (www.rti.org). For the purpose of this research those who fall into the classification of “very low food security”, will be the population that is examined.

It is virtually impossible to separate poverty from hunger. In the U.S., approximately 43 million people live below the poverty line making up the majority of that number is approximately 25 million between the ages of 18-64. 6.3 million, households are classified as having very low food security, with 30% of this number represented by children living in single parent dwellings. There are 12 states that exhibit higher than average rates of very low food security; Mississippi is #1 at 21%, but represented in this list is states from the northeast, southeast, southwest, midwest, and south (www.feedingamerica.org). In looking at the statistics provided we can see that hunger is directly related to poverty, with the largest percentages represented by the households with the greater number of mouths to feed and the fewest bringing in an income. Also demonstrated by the statistics; is that hunger does not discriminate by age nor is it restricted to a particular part of the country.

A low socioeconomic status is a key predictor of recurrent food insecurity. Higher than average proportions of households and individuals earning a low income and having achieved lower educational levels experience very low food security on a more frequent basis than the rest of the population. Approximately 60% of low SES households do not report experiencing food insecurities (www.rti.org, p. 2-2, 2-3). Research has shown that the answer to this may lie in the economic and food assistance that these households receive something that will be discussed later in this paper. Similar to poverty and hunger, there is a common theme between SES and race. African American, Native American, and Hispanic households experience food insecurity at a higher rate than white households. Food insecurity is experienced by 25% of African American households with Hispanic households at approximately 23% (www.rti.org, p. 2-4, 2-5). The research has determined that poverty is the main factor in causing hunger. While low SES and race play a role in those who experience food insecurity at a higher rate than others it must be realized that hungers only preference is that of poverty. The point that must be taken from the research thus far is that hunger is more prevalent in the lower levels of poverty. Based on this it can be stated that poverty is the common link to hunger in the U.S.A.

Since congress sought to put in place a safety net in 1946, to feed the hungry in the U.S. assistance has been the major objective. There are 15 federally funded programs under the direction of the USDA to provide assistance to those who qualify as food insecure. Supplemental Nutrition Assistance Program (SNAP), a subset of this program Women, Infants, and Children (WIC), School Meals, and Child and Adult Care Program are a few of them (www.rti.org, p. 4-3, 4-4, 4-5). There are thousands of programs that serve are public funded that serve the hunger on a local level. On a micro-level there is assistance provided by neighbors who collectively gather food goods to deliver to another neighbor who may be experiencing hard times. These programs assist the food insecure in purchasing or by giving them food. The problem with the programs is that they do not enable the individual or the household to become independent in securing their own food. One of the main problems with assistance can be seen in the political partisan turmoil that SNAP is currently caught in. On Nov. 1 2013 an automatic financial cut to this program was set to take place. President Obama extended funding for this program through 2014 (www.whitehouse.gov). This program is still caught up in the legislative wrangling of a partisan congress. When individuals and households have to rely on financial support that they do not control their security is in doubt and those who fall into the very low food security classification are left teetering on the brink of starvation.

The strategies that have been discussed and in some cases implemented as permanent corrective measures for food security haven fallen short. Raising wages for low wage and minimum wage earners has been the go to fix for decades. There are many problems that exist with this plan to end hunger. Foremost, one has to be employed to reap the benefits of raised wages. For minimum wage earners getting a raise probably means exceeding their allowed asset privileges to maintain government assistance. In their case an increase in salary is takes them a step back in income. Many businesses that hire low-wage earners could not afford to stay in business if they had to pay higher salaries. Fostering job growth is another initiative that is often brought up in the discussion on poverty. It is true that more good paying jobs would decrease the amount of people in the U.S. that have food insecurities. Communities can offer reduced prices on land, tax incentives, and infrastructure improvements to attract industries and businesses to their location. These industries are going to place a high value on pre-skilled labor and/or educated workers. In many cases, the jobs brought to the community will go to people already employed who is willing to relocate for a better salary or job. The economic increase brought about in the community from the industry or business will drive up property value, food prices, and other related material costs. This will leave the majority of those who the jobs were intended for in an even more insecure position. If your community is isolated like a former coal mining town where there is a small labor force and transportation costs will be a factor it will be difficult to entice an industry or business to move in. Many urban settings face the same dilemma just under a different set of circumstances. Cities that are segregated due to SES will not be able to attract certain industries or businesses. If they do attract new business they face a loss of housing to make room for the economic venture and rise in the cost of the remaining housing. Many of the newly created jobs will not go to those they were intended for.

In conclusion, creating jobs and employment in the areas of a high prevalence of food insecurity and not fostering jobs is what is needed. The government needs to take the lead role in this solution. Instead of providing financial assistance it needs to assist in creating financial independence. Federal money can be provided to each state based on the statistics concerning poverty and food insecurity. Road, federal and state building, and other infrastructure projects can be developed by each state. Rather than bidding federal and state projects out, which in many cases go to companies that are not within the state where the work is being done, it will be completed on a local level. The state will employ the labor determined to need the job, in the community that the project is being done. If that labor force is not sufficient then it will employ those in the immediate surrounding communities. This will require changes in laws and additional legislation. Salaries can be determined based on the cost-of-living by state. Those who need jobs will not be the only ones who benefit economically. The precedent has already been set and the effect already measured. It will be reminiscent of the projects put in place to bring America out of the Great Depression by President Roosevelt’s administration. Instead of spending federal tax dollars on assisting people it can be spent in making people self-sufficient and make a great stride towards ending hunger in the U.S.A. There will still be those who require assistance but on much smaller and manageable level.

RTI International Center for Health and Environmental Monitoring. (2014). Current and Prospective Scope of Hunger and Food Security in America: A Review of Current Research. Retrieved from: http://www.rti.org/sites/default/files/resources/full_hunger_report_final_07-24-14.pdf

Email ThisBlogThis!Share to TwitterShare to FacebookShare to Pinterest
Labels: hunger