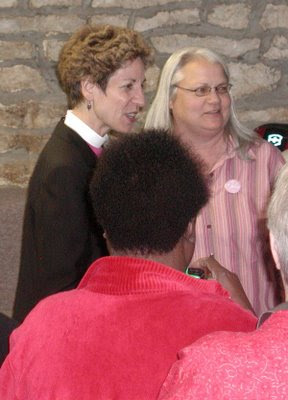 In a display of now unparalleled and unprecedented lawlessness for an ordained bishop, the Primate of All the Episcopal Church (USA) has thrown down the gauntlet to the Archbishop of Canterbury and the Anglican Communion as a whole. She has declared that on the basis of a letter written to her by the Rt. Rev. Henry Scriven, the former Assistant Bishop of Pittsburgh, on October 16, 2008, she has "accepted [his] renunciation of the Ordained Ministry of this Church . . . [and that he] is, therefore, removed from the Ordained Ministry of this Church and released from the obligations of all Ministerial offices, and is deprived of the right to exercise the gifts and spiritual authority as a Minister of God's Word and Sacraments conferred on him in Ordinations."
What makes this move on the Primate's part so outlandish is that Bishop Scriven has not been canonically resident in the Diocese of Pittsburgh in the Episcopal Church (USA) since October 4, 2008, when the Diocese voted by a sizeable majority to withdraw from ECUSA and affiliate temporarily with the Anglican Province of the Southern Cone. Details are not clear at this writing, but if events happened as they should have, Bishop Scriven would have received at that point a license from the Most Reverend Gregory Venables. (It is not known whether Bishop Duncan gave Letters Dimissory to Bishop Scriven before the former's "deposition" by the ECUSA House of Bishops on September 18, 2008.) At any rate, Bishop Scriven became for the time being a member of the House of Bishops of the Province of the Southern Cone, and in that capacity continued to assist in the Diocese of Pittsburgh through December 2008. He conducted, for example, an ordination of the Rev. Aaron Carpenter at St. Philip's Church in Moon Township, Pittsburgh, on December 9.
Read it all here.
Posted by Alice C. Linsley at 5:39 AM

Email ThisBlogThis!Share to TwitterShare to FacebookShare to Pinterest
Labels: justice