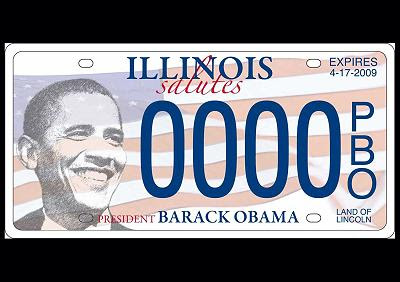 Can't get enough of Barack Obama? How about an Obama license plate?
Illinois Secretary of State Jesse White today unveiled an "Illinois Salutes Barack Obama" temporary license plate, which can be used for 60 days beginning Tuesday.
The plates feature a smiling President Obama, seemingly gazing towards your temporary numbers. A waving American flag fills the background.
The plates are only good through April 17. They cost $50 -- with proceeds benefiting Illinois libraries.
The temporary "special event" plates are available at www.ila.org/obama. They are also being sold at the Chicago Auto Show at McCormick Place.
Read it all here.
Posted by Alice C. Linsley at 6:03 AM