Patriarch Kirill of Moscow and All Russia 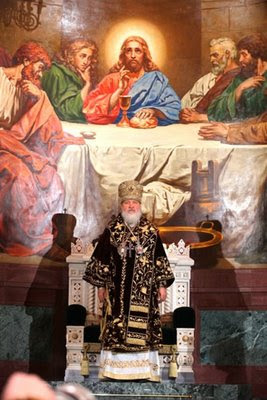 The enthronement of His Holiness Patriarch Kirill of Moscow and All Russia took place at the Cathedral of Christ the Saviour on 1 February 2009. He was elected to the Moscow Patriarchal Throne by the Local Council of the Russian Orthodox Church on January 27.

He was elected following the death of Patriarch Alexy II who was buried on December 9.

According to ancient custom, the bells started ringing fifteen minutes before the Divine service; as the nominated Patriarch arrived, festal peeling began. At the entrance to the cathedral, the elected Primate of the Russian Church was met with bread and salt.

The nominated Patriarch Kirill was vested as bishop plus the great paraman, a piece of cloth with the embroidered cross that is placed on the Patriarch by custom.

Email ThisBlogThis!Share to TwitterShare to FacebookShare to Pinterest
Labels: Russia