Burial Set for Patriarch of Moscow and All Russia 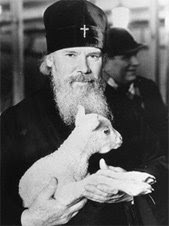 Patriarch Alexy II of Moscow and All Russia will be buried in the Epiphany Cathedral in Moscow on Tuesday, 9 December, Metropolitan Kirill, the head of the Moscow Patriarchate Department for External Church Relations, said on the television programme Slovo Pastyrya (The Word of the Pastor) broadcast on the Pervy Kanal (First Channel) network on Saturday.

Alexy II passed away the day after the feast of the Presentation of the Holy Virgin into the Temple.

Alexy II himself wished to be buried in the Epiphany Cathedral, where he had served the Liturgy for years and where the relics of St Aleksei, the deceased patriarch’s patron saint, are buried, Vladyki Kirill said. One of Aleksei II’s predecessors, Patriarch Sergei Stagorodsky of Moscow and All Russia (1867-1944, ruled 1943-44, patriarchal locum tenens 1925-43), is also buried in the Epiphany Cathedral, Metropolitan Kirill noted.

On Saturday afternoon, the coffin containing the body of Aleksei II shall be brought to the Cathedral of Christ the Saviour, which shall open its doors to the public, “so that the people can come and bid farewell to their Patriarch”, according to Metropolitan Kirill.

The Union of Orthodox Citizens (SPG) noted that St Aleksandr Nevsky left his mark in history as a “man who struggled for a prostrate Russia, he fought for Orthodoxy, and he won the victory, as he did not allow division in the country and the Church.”

In his will, Patriarch Aleksei II said he wished to be buried in the Annunciation side-chapel of the Epiphany Cathedral in the Moscow Kremlin, where he conducted his first service as Patriarch 18 years ago, before the Cathedral of Christ the Saviour became Russia’s main church.

Patriarch Aleksei was known for his persistent efforts to promote dialogue with other world religions. Benedict XVI, the Pope of Rome, was one of the first to offer his condolences to the MP Holy Synod over the dearth of the patriarch. The head of the Roman Catholic church called to mind Patriarch Aleksei’s efforts for mutual understanding and collaboration between Orthodox and Catholics. Aleksei II not only maintained dialogue with the Catholic world, he also overcame a division within the Church, reuniting the Russian Orthodox Church Outside Russia (ROCOR) and the MP in the homeland, thus, restoring unity in the Russian church.

Alexy II also held the line about homosexuality in the Church. He made a speech before the Parliamentary Assembly of the Council of Europe denouncing homosexuality as "an illness" and a "distortion of the human personality, like kleptomania." He regarded homosexuality is part of "a new generation of rights that contradict morality", and an example of how human rights are used to justify immoral behavior. The Patriach said "no one should force me and my brothers and sisters in faith to keep quiet when we call something a sin, when it is a sin according to the word of God."

Read it all here and here.
Posted by Alice C. Linsley at 5:53 PM