Ahmadinejad: "Israel at end of road" 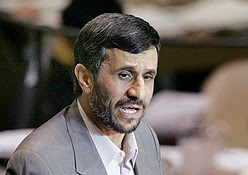 Thousands of Iranians held a protest rally in Teheran Friday against the blockade of the Gaza Strip, while Iranian President Mahmoud Ahmadinejad said that Israel had "reached the end of the road."

Also attending the rally, Ahmadinejad told reporters that the Israelis "have reached the end of the road and their abnormal behavior is due to anger and even their supporters are shaky in backing them.

"By committing these atrocities they want to pressure the Palestinians to influence their elections."

Ahmad Khatami, conducting the Friday prayers, slammed the "United Nations, Organization of Islamic Conference, Egypt, the Europeans and United States" for their inaction on Gaza.

"Why are the UN and OIC keeping silent? Where are the European nations who are the defenders of human rights?" Khatami said in his sermon, broadcast live on state-run radio and quoted by AFP.

"We can see the hands of (US George W.) Bush and (president-elect Barack) Obama in these crimes," he said.

Khatami criticized Egypt's leadership for closing down the Rafah crossing with the Gaza Strip, saying that "by doing this they are cooperating with them (Israel).

"I am telling the Gazans and Palestinians in the occupied territories that the only way for salvation is by resisting the way Hizbullah did," continued Khatami.