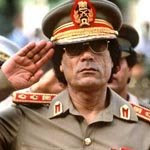 Kampala: The recent election of Libyan leader Muammar Gaddafi as the chairman of the African Union has been received with mixed feeling across the continent.
There is the school of thought that Africa is in for a very explosive period under the flamboyant Libyan leader. Proponents of this thought say so because finally Africa has a chairman who says that coups are welcome so long as they are staged peacefully.
The mixed feeling towards Gaddafi arises from his backing to some of the evils that have befallen African recently, like the piracy activities. “Col Gaddafi says that there is nothing wrong with piracy since it is a way to correct colonial wrongs,” wrote the Daily Nation of Kenya recently.
Following his election in Addis Ababa Ethiopia in early February 2009, Col Gaddafi addressing journalists said: “Coups and rebellions are spontaneous events that cannot be controlled. Coups are fine so long as they are staged peacefully.”
He had this view on democracy: “If you want to have political formations, there will be tribal parties. We do not have political structures, our system is social. The system that is being tried in Africa has not been successful,’’ said the African Union Chairman.
The Libyan leader, who has ruled the rich oil producing country for 40 years under the Jamahiriya “Mass-State” system, claimed that the post-election violence in Kenya in December 2007-January 2008 was a sign that democracy cannot work in Africa.
Speaking on war-torn Somalia where gunmen have seized ships and demanded ransoms, Gaddafi said: “It is not piracy, it is self-defence, and it is defending Somali children’s food. It is a response to greedy Western nations who invade and exploit Somalia’s resources illegally."
Gaddafi is currently the fifth-longest serving head of state in Africa and the longest serving head of government worldwide. He came to power in 1969 in a coup that toppled Libyan monarchy then led by King Idris I.
“The signs are that Africa is in for a very tumultuous time under the guardianship of Col Gaddafi,” wrote the Daily Nation of Kenya.
Read it all here.
Posted by Alice C. Linsley at 6:47 AM