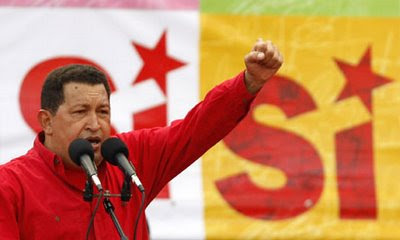 Venezuelans yesterday voted to abolish term limits for elected officials, boosting Hugo Chávez's ambition to rule the country for decades.
Electoral authorities said 54% of voters in the referendum backed a constitutional amendment allowing indefinite re-election, with 46% rejecting it – a margin of almost 1 million voters.
An exultant Chávez appeared on the balcony of the presidential palace in Caracas to address cheering supporters after the result was announced. "It is a clear victory for the people," he said. "It is a clear victory for the revolution."
The result boosts his effort to transform the Opec country into a socialist state and burnish his leadership of Latin America's "pink tide" of leftwing governments.
The president's mentor and ally Fidel Castro sent congratulations from his sickbed in Cuba.
The US made no immediate comment, but the Obama administration will be dismayed at the prospect of an emboldened foe in Caracas.
Chávez, a 54-year-old former tank commander, has been in power for a decade and plans to run for election again when his term ends in 2013. He has spoken of ruling beyond 2030.
However, plunging oil revenues are expected to hit the Venezuelan economy and the petro-fuelled Chavez diplomacy soon.

Some analysts predict stagflation and devaluation of the bolivar currency – the kind of grim cycle that undid previous Venezuelan leaders – and there was speculation that Chávez had rushed through the referendum before the crisis hit.
The unexpectedly wide margin of victory prompted rapturous celebrations among "chavistas", who credit their charismatic leader for poverty-alleviating social programmes, notably free health care and discounted food.
"We did it, we won – this is a great night," Freddy Ramirez, a 48-year-old security guard, said.
Fireworks lit up the night sky and cars filled with flag-waving supporters drove around the capital.
However, not everybody celebrated. "Chavez has screwed this country enough already," Ricardo Torres, a 56-year-old courier, said.

He blamed the president for crumbling infrastructure and high crime and inflation.
Voters had narrowly rejected a referendum to abolish presidential term limits in December 2007.
Chávez learned lessons from that defeat, this time widening the terms of the referendum to allow mayors and governors to run indefinitely, giving them an incentive to mobilise support.
The government's "red machine" waged a formidable campaign. Posters urging a "yes" vote saturated the country, state TV networks cheered for the "si" and civil servants were sent out to canvass.

A flyer gave 10 reasons for voting yes. Number one said: "Chávez loves us and love is repaid with love", and the second stated: "Chávez is incapable of doing us harm".
Read it all here.
Posted by Alice C. Linsley at 1:21 AM