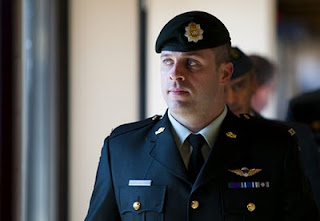 A Canadian Army officer is being court martialed for shooting a wounded and unarmed Taliban prisoner in a case which shows the ever-shifting definition of "mercy killing". Captain Robert Semrau has pleaded not guilty to charges of second-degree murder, attempted murder, disgraceful conduct and negligent performance of duty. It is the first time that a Canadian soldier has been charged with a battlefield murder.


A novel feature of the case is that Captain Semrau is alleged to have asserted the existence of a mercy killing pact in combat. This was supposed to be an agreement between enemy warriors that each would put the other out of mortal pain. As the military prosecutor described it, "You do to the enemy what you would want or expect him to do to you."

According to the prosecution, Taliban insurgents ambushed Canadian and Afghan soldiers late in the evening of October 19, 2008. Video footage exists of a wounded Taliban having his rifle, vest and ammunition removed and being assaulted, spat upon and kicked with sand while Semrau, the senior Canadian, stood by. Then he allegedly decided not to provide medical attention which could have saved the fighter's life. Instead he shot the man twice in the chest. ~ Toronto Star, Mar 25
Posted by Alice C. Linsley at 9:08 PM

Email ThisBlogThis!Share to TwitterShare to FacebookShare to Pinterest
Labels: crime

Two important corrections to the story that might impact the "ethical" perspective:

1. There was no medical aid available to be given (a request for a medevac for one of the NATO mentors wounded earlier had been waved off because the area was too dangerous for a rescue)

2. The Taliban fighter was mortally wounded. He had been eviscerated by an Apache helicopter gunship. There was little more left than a head and a thoracic cavity. There is zero doubt he would die. The only doubt was whether he would die before or after the dogs and vultures began eating him.

In other words, war is a horror!

Could you verify your information, please?