Anti-War Protests in the Capitol 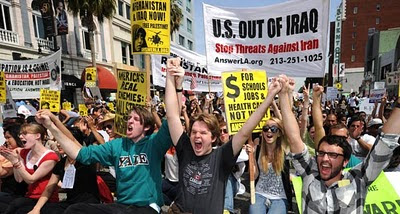 WASHINGTON: Thousands of anti-war protesters took to the streets of the US capital Saturday, on the seventh anniversary of the US-led war in Iraq in a show of frustration widely ignored by the media and public.

As the National Marathon wound down in the city, protesters after midday gathered outside the White House bearing signs alluding to the high cost of the war both in money and human lives and decrying the use of unmanned aircraft, or drones, to bomb US enemies.

Under sunny skies and the watchful but discreet gaze of uniformed police, some demonstrators carried coffins draped in the Iraqi and Afghan flags in homage to civilian deaths the fighting in both countries has caused.

“Obama policies in Iraq and Afghanistan are as criminal as Bush’s,” said Iraqi Veterans Against the War member Mathhis Chiroux, 26, referring to President Barack Obama’s continuation of the two-front war his predecessor George W. Bush began.

“The US machine produces war regardless of who is president. We are killing innocents,” he added.

Larry Syverson, 61, carried a photograph of his soldier son, Branden, currently deployed in Afghanistan.
“I am here to remind the Americans there are two wars going on,” he said.

But despite the colorful, often vociferous demonstration, there was little awareness elsewhere of the Saturday milestone in the Iraq war.

Besides mentioning the anniversary in passing, US media focused almost exclusively on the political brinkmanship preceding Sunday’s vote in the House of Representatives for Obama’s flagship health care reform bill.

“People are getting used to the war, and don't bother even to think about it anymore,” said Kathy Hoang, of Manchester, Connecticut.

According to the independent icasualties.org Website, 4,385 American soldiers have perished in Iraq since the invasion of the country was launched in March 2003.

Another 1,024 have died in Afghanistan.

Compare that to the civilian casualties in the two countries and the numbers really soar. Just Foreign Policy, an independent group based in Washington, estimates the number of total Iraqi deaths since the invasion to be 1,366,350. And while the total number of Afghan deaths since the US-led invasion in 2001 is uncertain, the United Nation estimates that 5,978 civilians were killed in 2009 alone.

Seven protesters, including activist Cindy Sheehan, were arrested at the rally in Washington.

Sheehan began shouting “arrest that war criminal” through a bullhorn and pointing to the White House from an area of sidewalk that park police had closed off Saturday afternoon. The other six protesters were among a group of more than a dozen who had lain down on the sidewalk next to a row of flag-draped cardboard coffins outside the White House fence.

Sheehan has been a vocal critic of the war since her 21-year-old son Casey was killed in Iraq in April 2004.

Email ThisBlogThis!Share to TwitterShare to FacebookShare to Pinterest
Labels: freedom of speech, war