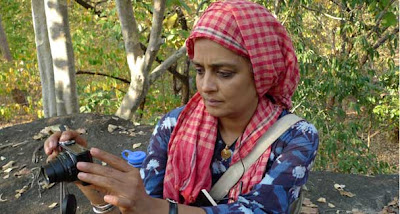 There are many ways to describe Dantewara. It’s an oxymoron. It’s a border town smack in the heart of India. It’s the epicenter of a war. It’s an upside down, inside out town.

In Dantewara the police wear plain clothes and the rebels wear uniforms. The jail-superintendant is in jail. The prisoners are free (three hundred of them escaped from the old town jail two years ago). Women who have been raped are in police custody. The rapists give speeches in the bazaar.

Across the Indravati river, in the area controlled by the Maoists, is the place the police call ‘Pakistan’. There the villages are empty, but the forest is full of people. Children who ought to be in school, run wild. In the lovely forest villages, the concrete school buildings have either been blown up and lie in a heap, or they’re full of policemen. The deadly war that’s unfolding in the jungle, is a war that the Government of India is both proud and shy of.

Operation Green Hunt has been proclaimed as well as denied. P. Chidambaram, India’s Home Minister (and CEO of the war) says it does not exist, that it’s a media creation. And yet substantial funds have been allocated to it and tens of thousands of troops are being mobilized for it. Though the theatre of war is in the jungles of Central India, it will have serious consequences for us all.

If ghosts are the lingering spirits of someone, or something that has ceased to exist, then perhaps the new four-lane highway crashing through the forest is the opposite of a ghost. Perhaps it is the harbinger of what is still to come.

The antagonists in the forest are disparate and unequal in almost every way. On one side is a massive paramilitary force armed with the money, the firepower, the media, and the hubris of an emerging Superpower.

On the other, ordinary villagers armed with traditional weapons, backed by a superbly organized, hugely motivated Maoist guerilla fighting force with an extraordinary and violent history of armed rebellion. The Maoists and the paramilitary are old adversaries and have fought older avatars of each other several times before: Telengana in the ’50s, West Bengal, Bihar, Srikakulam in Andhra Pradesh in the late ’60s and ’70s, and then again in Andhra Pradesh, Bihar and Maharashtra from the ’80s all the way through to the present.

Email ThisBlogThis!Share to TwitterShare to FacebookShare to Pinterest
Labels: freedom of press, war