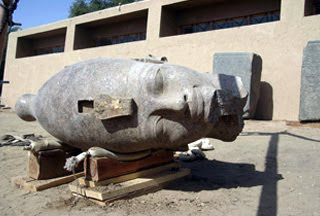 Egyptian archaeologists have unearthed a colossal statue head of the pharaoh whom DNA tests revealed last week was King Tutankhamun's grandfather, the government said on Sunday.

The red granite head of King Amenhotep III, part of a larger 3,000 year-old statue, was discovered at the site of the pharaoh's funerary temple in Luxor, Egypt's culture ministry said in a statement.

"It is a masterpiece of highly artistic quality and shows a portrait of the king with very fine youthful sculptured features," Hawass said, adding there were still traces of red paint on the head.