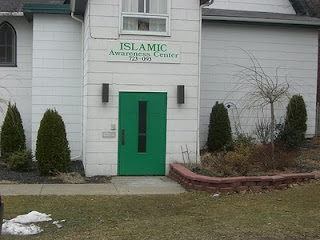 Former Episcopal Church of the Good Shepherd
At BabyBlue’s, Matt Kennedy, former priest at Good Shepherd Church, writes in the comments:
The fact is that Good Shepherd had doubled in size from 2002 to 2009 when we lost the building despite the poor demographics in town.

And, during negotiations, we offered three times the amount for the property than did the mosque which eventually bought it.

Instead the diocese sued us, kicked us out of the building and my family out of our home, and sold the church building cut rate to those who teach that Jesus is not God, did not truly die, did not rise, and is not Lord. 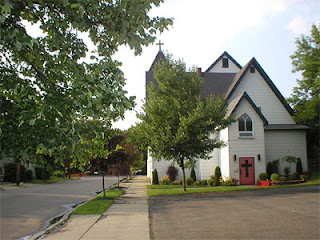 Read more here.
They have removed the cross, the most fundamental reality of creation.  Those who sold it and those who now inhabit it little understand the seriousness of this affront to Christ our God. Lord, have mercy!
Posted by Alice C. Linsley at 5:07 PM