Use of Military to Restrict Americans 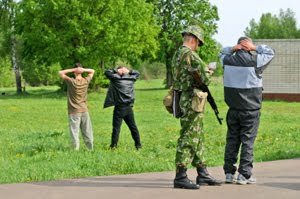 Martial Law in the USA is not new, but some are worried about the Obama government's use of the military to enforce the programs of his left-leaning administration. Could it happen here?

Martial Law was declared by General Andrew Jackson during the War of 1812.

President Lincoln declared marital law during the Civil War, arresting anyone who dissented from his war-time policies, including newspaper editors and legislators.

Much of the Pacific Coast was under martial law after the Japanese attacked Pearl Harbor.

There is also the precedent of domestic use of the military without a declaration of martial law.

In 1914, President Wilson ordered the infantry to disarm everyone in Colorado involved in a labor union dispute, including members of law enforcement and the National Guard.

In 1993, the US Army provided advice, tactical support and military equipment to the FBI and the BATF to raid the Branch Davidian Compound in Waco, Texas where 74 men, women and children lost their lives.

According to some who are worried, federal troops were used more than 100 times without a declaration of martial law in the first 130 year of our history as a nation.
Posted by Alice C. Linsley at 11:00 AM