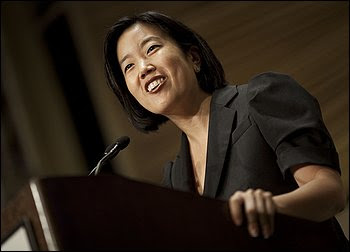 Rhee appeared on the cover of Time wielding a broom to symbolically sweep incompetence out of her public schools. Yikes.

But there's a reason Rhee plays hardball: She has no choice.

Running a hurry-up education offense is the only way Rhee can maintain a viable-sized school district that has dwindled to a mere 44,000 students, while the city's charter school population is expected to grow to 28,000 this year. When Duncan was in Chicago, a restrictive state cap meant that less than 5 percent of students there could attend charter schools.

In the District, charters continue to attract more new students than Rhee's schools. If Rhee can't stanch or reverse that trend, her district slumps into irrelevancy, a fact of life that her union opponents seem incapable of grasping. If Rhee falters, the layoffs will continue.

The top-performing middle school in the District is the KIPP KEY Academy, which is staffed by highly motivated teachers, many of them Teach for America veterans. The Knowledge Is Power Program (KIPP) operates seven schools in the District, educating 1,500 students.

The advantages enjoyed by charters, which can pick and choose their staff, are considerable. Among the 1,500 schools in New York City, the top-ranked one on the city's 2007 progress report was Williamsburg Collegiate Charter School. There's just one secret to its success, says Evan Rudall of the Uncommon Schools network, which runs Williamsburg: high-quality teachers. "The best way to find such teachers is by using the latitude granted to charter schools: interviewing hundreds of candidates, both certified and uncertified, to find out if they know their material, are enthusiastic about their subject matter, and can maintain classroom control."

Email ThisBlogThis!Share to TwitterShare to FacebookShare to Pinterest
Labels: education

I agree, George. Private schools have this advantage also. I've taught in an all-boys Episcopal boarding school, 2 Christian schools and a military secondary school. All provided superior education to the public schools I've taught in. Very sad! Especially given the dedication of most public school teachers. They are saddled with many things that make for failure and yet many still succeed. The problem is systemic.