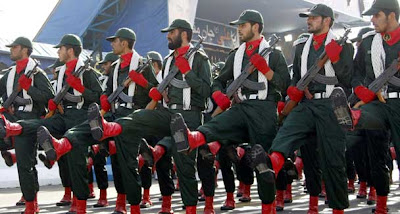 A suicide bomber killed seven commanders of Iran’s elite Revolutionary Guards and up to 42 other people on Sunday in an attack that President Mahmoud Ahmadinejad charged had been plotted from Pakistan.


TEHRAN, Oct 19: Iran’s supreme leader Ayatollah Ali Khamenei has pointed a finger of blame at the United States for Sunday’s suicide bombing at a meeting of the Revolutionary Guards and tribal chiefs in Sistan-Baluchestan.

“This terrorist crime revealed the evil face of enemies of security and unity who are supported by intelligence organisations of some arrogant governments,” he said on Monday, according to the Isna news agency.

Iranian President Mahmoud Ahmadinejad, in a telephone conversation with President Asif Ali Zardari, charged that those behind the bombing were in Pakistan and needed to be “quickly confronted”.

“Iran and Pakistan have a brotherly relationship, but the presence of terrorist elements in Pakistan is not justifiable,” the Irna news agency quoted him as saying.

“The Pakistani government should help to quickly arrest these criminals so that they can be punished,” the Iranian president said, adding: “The criminal terrorists must be seriously confronted by setting up a bilateral timetable.”

The head of the Revolutionary Guards corps, Gen Mohammad Ali Jafari, said that an Iranian delegation would head to Pakistan to deliver “proof” that Islamabad was supporting (Jundallah group’s chief Abdolmalek) Rigi who had claimed the responsibility of the attack.

“The delegation will ask for him to be handed over,” he said.

“He is supported by them and without doubt he is acting under their orders and plans.” (President Asif Ali Zardari called President Mahmoud Ahmadinejad and condemned the attack, according to an APP report from Islamabad. Mr Zardari said the incident was “gruesome and barbaric” and bore the “signatures of a cowardly enemy on the run”. He said Pakistan would continue to support and cooperate with Iran in curbing militancy and fighting extremism and terrorism. The president expressed sympathies with the government and people of Iran and prayed for those who lost their lives in the incident.)

Gen Mohammad Pakpour, the head of the Revolutionary Guards’ ground forces, said Washington and London were backing those who launched the attack against Iran’s prestigious military force.

“The terrorists were trained in the neighbouring country by the Americans and British. The enemies of the Islamic Republic of Iran are unable to tolerate the unity in the country,” he said on state television.

A senior judiciary official in the province, Hojatoleslam Ebrahim Hamidi, said that “more than 30 Sunni tribal chiefs” were among the dead.

Jundallah charged that the authorities were plotting “to sow divisions among Baloch tribes and clans”.

Sistan-Baluchestan’s deputy governor Jalal Sayyah said Iran had identified the bomber but no arrests had been made. “It is likely that those who supported the bombing have fled to the other side of the border,” the Fars news agency quoted him as saying.

Iran’s first deputy speaker Mohammad Hassan Abutorabi told parliament that “the horrible crime in Sistan-Baluchestan was carried out with the direct support of criminal America and its mercenaries”.

Some of the dead who hailed from provincial capital Zahedan were buried on Monday.

Isna quoted a lawmaker from Sistan-Baluchestan, Payman Forouzesh, as saying: “There is unanimity about the Revolutionary Guards and the security forces engaging in operations in any place they would deem necessary.”

Apparently referring to agreement among lawmakers, he said: “There is even unanimity that these operations (could) take place in Pakistan territory.”

Britain denied allegations that it aided rebels behind the attack. “We reject in the strongest terms any assertion that this attack has anything to do with Britain,” a Foreign Office spokeswoman said in London.

In a statement posted on the internet, Jundallah said the attack’s aim was to avenge “the wounds of the Baloch people which have been bleeding for years without end”.

It named the bomber as Abdul Wahid Muhammadi Sarawani and said Iranian intelligence officials were among the dead.

“During the past year alone, this regime killed hundreds of youths of this province by firing squad, execution or torture. The Baloch people... are determined to stand against injustice and to obtain their freedom till the last drop of their blood,” the group said.