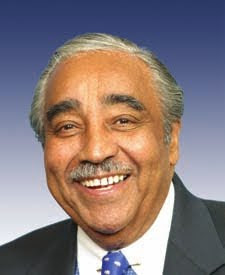 Charles B. Rangel's (D-N.Y.) Democratic colleagues blocked a move to strip him of his powerful committee chairmanship on Wednesday amid numerous allegations of violating congressional ethics rules.

A Republican-sponsored resolution said Rangel was unfit to chair the Ways and Means Committee, which writes Congress's tax laws, while he is under investigation by the House ethics committee. But Democrats prevented debate on the resolution and, on a 246 to 153 vote, instead sent it to the ethics committee for consideration.

Six Republicans voted with the Democrats, while two members of Rangel's party sided with the Republicans. More than a dozen others abstained because they are on the ethics committee and investigating allegations that Rangel failed to disclose rental income from a villa he owns in the Dominican Republic, improperly used a rent-controlled New York City apartment for a campaign office, and attended a congressional trip that was funded by lobbyists.

The resolution, sponsored by Rep. John Carter (R-Tex.), amounted to a withering indictment of Rangel, referring constantly to newspaper articles listing the alleged violations by the Harlem congressman and to editorials ripping him.

"We can already hear the defense of the next tax deadbeat called into court: If Charlie Rangel doesn't have to pay his taxes, why should I?" Carter said, quoting from an editorial in the New Haven Register.