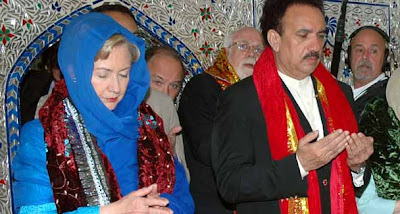 US Secretary of State, Hillary Clinton, scolded Pakistan on its failure to nab terrorists in her 3-day visit there. During her stay the Pakistan army captured a major terrorist stronghold in South Waziristan. She also called for better economic management. This comes after the approval of about 7 billion in US aid to Pakistan.

The most senior US official to visit since President Barack Obama put the nuclear-armed state at the heart of the war on Al-Qaeda, Clinton took issue with Islamabad’s position that the Al-Qaeda leadership is not in Pakistan.

‘I find it hard to believe that nobody in your government knows where they are and couldn’t get them if they really wanted to,’ she added.

‘Maybe that’s the case; maybe they’re not gettable. I don’t know... As far as we know, they are in Pakistan,’ she added.

She also showed impatience with criticism of a record US non-military aid bill giving Pakistan 7.5 billion dollars, which the army and political opposition have slammed for violating the country’s sovereignty.

‘At the risk of sounding undiplomatic, Pakistan has to have internal investment in your public services and your business opportunities,’ Clinton told businessmen.

Read the full report here.
Posted by Alice C. Linsley at 2:16 AM