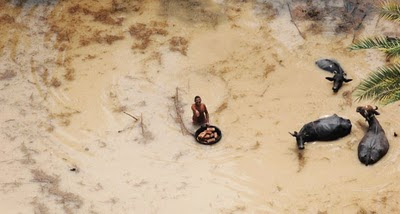 GHOTKI / SUKKUR: “Look! Someone is drowning,” yells a man standing at the Qadirpur embankment. Just a few metres away, hundreds of thousands of cusecs of water flows mercilessly, taking with it whatever comes its way.

“There he is,” remarks an observer at the embankment. Others too notice a head floating at a considerable velocity. By this time it becomes clear that the ‘drowning’ man is not alone. With him, nearly a dozen buffaloes are floating as if they were weightless.

“Leave the animals and just come out,” shouts a rescue official at the embankment while unsuccessfully mustering the courage to enter the ferocious water for rescue.

But the ‘drowning’ man flows past, ignoring the advice and continues his desperate attempt to steer the buffaloes out of the water. To the astonishment of many, he succeeds and manages to come out of the water along with his herd.

The man is clearly shocked and exhausted to the extent that he fails to realise that his lower garment is missing. Rescuers cover the shivering man with a sheet. He identifies himself as Deen Mohammad and after a few minutes he is back on his feet, guiding his cattle.

“They are my family. They feed my children. When the soldiers came to rescue us in boats they refused to allow my cattle on the boat. So I sent my family on the boat and stayed behind. This morning I decided to try my luck and entered the water along with the cattle. It was scary,” he recounts.

But others have not been as relatively lucky as Deen Mohammad. About a kilometre from the Qadirpur embankment, Bashir is surveying his losses.

“My house and crops have been destroyed. I have shifted my family to Sukkur but don’t know where to go from here. On the one hand I want to be with my children but I fear my land may be occupied,” he says.

“The fear of losing property to thieves or rival groups is widespread. We have had cases where rescued people have refused to disembark our boats, saying this is rival territory and they should be dropped elsewhere,” says Major Muhammad Abid.

Meanwhile, some hundred kilometres away in Sukkur, many families including Bashir’s have taken shelter in a relief camp near the city’s toll plaza.

“We have been dumped here and forgotten. The government is treating us like beggars. The only time they come to us is for votes or when you people (the media) are here. It is mostly private individuals who sometimes provide us with food and other necessary items,” says an angry man in his sixties.