US Aid to Pakistan Flood Victims 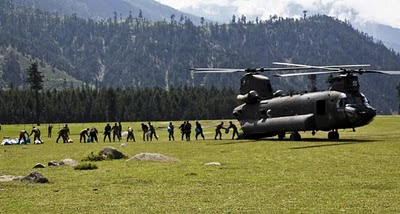 US Army Chinook
TAMPA, Florida: The United States tripled Wednesday the number of helicopters helping Pakistan's flood relief effort, as top US officials issued somber warnings about the massive scale of the disaster.

US Defense Secretary Robert Gates said the USS Peleliu, an amphibious assault ship, was moored off Karachi awaiting the green light to dispatch its 19 helicopters to the disaster zone.

“The flooding in Pakistan has the potential to be significantly more disastrous for the country than the earthquake several years ago,” Gates said, referring to the 2005 Kashmir earthquake that killed more than 73,000 people.

“The (US) president (Barack Obama) wants to lean forward in offering help to the Pakistanis,” Gates said. “We will work with them (the Pakistanis) and do this at their pace.”

Six US helicopters —to be redeployed to Afghanistan once those on the Peleliu begin work —have so far rescued 3,000 people and delivered 146 tonnes of aid, Pentagon spokesman Geoff Morrell said.—Reuters
Posted by Alice C. Linsley at 7:18 PM