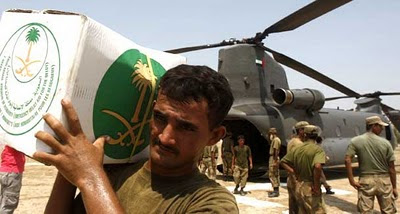 Pakistani soldier carries supplies sent from from Saudi Arabia to aid flood victims.
ISLAMABAD: Pakistan has so far received aid pledges for $466.11 million from a number of countries. Saudi Arabia has promised to provide $124.29 million which is the highest donation offered by any country.

“Till today we have received aid commitments for $466.11 million for the flood-affected people,” Zafar Hasan Reza, a senior official of the economic affairs division, said on Wednesday.

Of the $100 million earlier committed by the Saudi government relief goods worth $60 million have already been delivered and goods worth $40 million are in the pipeline.

A total of $19 million has been raised by the general public in Saudi Arabia. In addition, $5.29 million has been handed over to National Disaster Management Authority.—APP
Posted by Alice C. Linsley at 3:45 AM