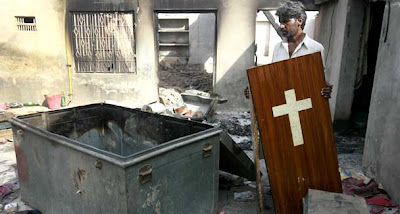 Gojra Christian returns to destroyed home. About 40 Christian homes were burned. Others were looted. Seven Christians were burned to death in their homes.


On August 1, Pakistan Dawn reported the violence in Gojra was against a "minority" when the reporter knew that the victims were all Christians. Then this report, admitting that the victims were Christians who had been viciously targeted by Islamic radicals while the local authorities neglected their responsibility to protect citizens.
TOBA TEK SINGH, Aug 2: As the death toll in violence against the Christian community rose to seven, relatives of the victims blocked the Multan-Faisalabad section of the railway track for over six hours on Sunday by placing on the track the coffins of the people killed in Gojra on Saturday.

They protested against attacks on their houses and burning alive of seven members of their community by a mob.

Rangers patrolled the area as shops and businesses remained closed.

Violence had broken out in a Gojra village on Thursday after an alleged incident of desecration of the Holy Quran during a wedding ceremony.

The incident triggered two days of violence in which a mob torched a large number of houses, burning seven people alive.

During the talks, local leaders of the community said they would end their protest only after names of the DPO and DCO were included in the FIR of the case. Addressing the protesters, Pakistan Minorities Democratic Alliance president Atif Jamil Pagaan accused some of their leaders of betraying the community. A group of youths jeered at Faisalabad’s Bishop Joseph Coute when he was addressing the protesters at the railway track.

The provincial in-charge of the Human Rights Commission of Pakistan, Mahboob Ahmad Khan, Labour Party leader Tariq Mahmood and dozens of rights activists from Lahore, including Nadeem Anthony, Waliur Rehman, Munawar Shahid, Iftikhar Butt and Atif Nadeem, were present during the protest. The protesters ended the blockade of the track only when provincial minister Kamran Michael showed them a copy of an FIR naming the DCO and DPO (for negligence), 15 other people and 800 unidentified people for being involved in the killing of their men and damaging their property.

Later, final rites of the seven deceased were performed in a church on Samundri Road and the bodies were laid to rest in a local cemetery.

Meanwhile, Gojra city police have arrested more than 65 people for their alleged involvement in the violence. The arrested men include Qari Abdul Khaliq Kashmiri, a leader of the banned Sipah-i-Sahaba Pakistan. Police also raided the house of Sipah-i-Sahaba activist Abid Farooqi but he escaped and police took his father and two brothers into custody.

Agencies add: Local administration chief Tahir Hussain told reporters that Rangers had been deployed in the violence-hit areas who had arrested 12 suspects. Three of the arrested people were from a banned sectarian group, he said. Provincial Law Minister Rana Sanaullah, who visited the violence-hit town on Sunday, promised to pay compensation to the affected families.

“We have identified those who attacked. They are terrorists, these people want to destabilise our country,” he told reporters. “We will give compensation to the victims, we will pay them for all the losses they suffered,” Mr Sanaullah said. Local people and officials said the situation on Sunday morning was tense, but there was no unrest. "There is too much fear among the Christians,’’ said provincial Minister for Minority Affairs Kamran Michael. "The situation is tense in the city, but security has been enhanced to keep the situation under control.’’

Sohail Iqbal, a cellphone shop owner in the city’s main market, told The Associated Press by phone that there was a heavy police presence in the area. "We have opened our shop and others too, but the atmosphere is grim and tense,’’ he said.

Federal Minister for Minorities Shahbaz Bhatti said 40 Christian homes had been torched on Saturday by the banned Sipah-i-Sahaba group, which is accused of attacking security forces and of staging bombings at public places in recent years. He said there was no truth to allegations that the Holy Quran had been defiled and accused the police of ignoring his appeal to provide protection to Christians under threat.

In a statement released on Sunday, Italian Foreign Minister Franco Frattini denounced the violence against Christians as ‘’a very grave and unjustifiable attack against human rights and in particular against the inalienable right to religious freedom’’.

ALLAH THE ALMIGHTY IS ALREADY ON EARTH !!!

The sigh of His arrival: A face in the sky video
http://www.youtube.com/watch?v=4_OAauYfPwE

For details:
Please stop in http://manaalmahdi.wordpress.com
Please refer to someone incharge fitted whatever doctrine you are.
This is an exceptionally distinguished essence fitted all mankind.

Jesus Christ, the Son of God, grant clarity through HIS Blood.