Call for Justice for Punjab Christians 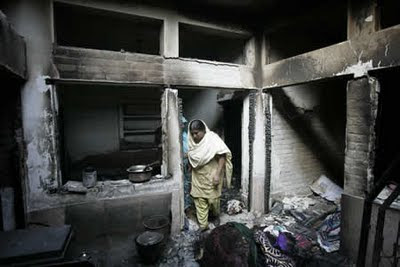 Christian woman returns to her burnt out home in Gojra, Punjab after her community was attacked on Saturday by a mob led by masked Muslim extremists. Eight Christians were burnt alive, mostly women and children. Several others were injured. More than 125 houses were looted and burnt, and several Churches were set on fire by extremists using chemical bombs.

This is a forth incident of this type within the last two months.

Muslim extremists want to destroy the Christian minority in a land where Christians have deep roots. The world must demand that those who do evil against a peaceful people be punished.
Posted by Alice C. Linsley at 6:58 AM