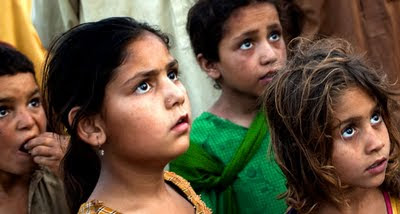 
In contrast to the aid made available for the Swat IDPs, the state appears to have forgotten about the internally displaced from Bajaur Agency. Accommodated in Kacha Garhi camps 1 and 2, established in September last year, thousands of people seem virtually abandoned.

The camp administration’s requests to the relevant authorities in terms of requisitioning new tents, since those distributed 14 months ago are now unusable, have gone unheeded, as have pleas for adequate water and sanitation facilities. Camp residents complain that the food aid provided to large families has been slashed by half, and monies promised under the Benazir Income Support Programme were only disbursed once during the past nine months. Further, they oppose the proposed shifting of the camps to Jalozai, which they say has far fewer facilities.

This shameful situation begs the question of whether the IDPs of Bajaur are somehow less than equal citizens of the country. The lack of response from the private and public sectors could be attributed to the onset of crisis-fatigue in a country battered by militancy and terrorism; if so, this only makes the Bajaur IDPs’ situation more grievous. With winter setting in, all possible aid must be provided to these families. Secondly, it is time to realise that the country is in for the long haul in terms of the battle against terrorism.

Recent reports have indicated that the tentacles of the militants have spread far wider than previously thought, and the theatre of war too may widen. There is therefore a possibility that people may be displaced from other areas such as North Waziristan and southern Punjab. It may be useful to create a humanitarian agency tasked specifically with aiding the country’s internally displaced. It is time to stop dealing with the IDP issue on a case-to-case basis.

Email ThisBlogThis!Share to TwitterShare to FacebookShare to Pinterest
Labels: refugees