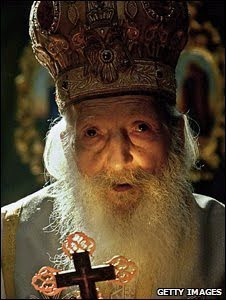 My beloved Brothers and Sisters in Christ Jesus, Early this morning, our Lord Jesus Christ called the soul of His true servant, PAVLE, Patriarch of Serbia, into His Kingdom. As I was reading names during the Proskomide for the Holy Liturgy, one of the sisters brought me a little note as to His Holiness having fallen asleep.

At first I was startled by the news. I had only met this holy Hierarch once, but he made an everlasting impact on my life. As I read the Holy Gospel of the Parable of the Good Samaritan, I could not hold back the tears; once I came to the Lord describing how the Samaritan had deep compassion of the wounded man, and how he took him the Inn and placed him in the care of the Innkeeper. St. John Chrysostomos tells us that the Inn is the Church, and the Innkeeper represents the Holy Bishops. Indeed, my brothers and Sisters in Christ, Patriarch Pavle is a living ikon of the Christ-like Innkeeper, who cares for all the wounded souls in need of healing and forgiveness.

On July 22, 2001, I had the sacred honor to co-celebrate the Holy Liturgy with Patriarch Pavle, when he made a visit to Pittsburgh. Never before have I met a Hierarch so totally focused on worshipping the Holy Liturgy! It was as if I were in the presence of Christ Himself! When, during the Great Entrance, and the serving priests were assigned to carry the miters of the several Hierarchs, this sinful priest rushed to grab the one of the holy Patriarch. I cannot describe in words what joyful sadness I experienced within my heart: joy, because I held the crown of a saintly Bishop; sorrow, because of the realization that I was filled with sin and unworthy to have literally seized His Holiness' Miter from the Holy Altar Table.

At the end of the Holy Liturgy, His Holiness offered a homily in Serbian. Although I have absolutely no knowledge of the Serbian language, the Patriarch's words caused spontaneous tears to flow from my eyes to such a great extent that I began to sob! I know that those Spirit-filled words, which were totally unintelligible to my brain, brought healing and living Water into my wounded and parched soul!

During the meal that followed, I went up to His Holiness (who has a Theological Degree from the University of Thessalonike in Greece) to greet him on my Spiritual Father, Geronta Ephraim, and Gerontissa Theophano and her Sisterhood. After blessing me, His Holiness patted my sinful head; and my heart overflowed with joy! I think that one of the main reasons that I wept during today's Gospel, was from recalling a story that someone had recently told me --- an event in which the Samaritan's holy compassion was incarnated by the words and actions of His Holiness.

When he was the Bishop of Kosovo, he was brutally and severely beaten by a young Muslim man. So intense was this beating, that the frail Bishop almost died; and was in the Hospital for a few months. Upon his dismissal from the Hospital, the then Bishop Pavle went to the prison where the young man was incarcerated. He told the one who had almost killed him that he felt he needed to go home to his parents; because they needed him!

Then he called the warden of the prison and demanded the young man's release. When the warden refused, Bishop Pavle told him, 'I have nothing against this young man; and I will not speak against him. Therefore, you must release him now!'

What true Christ-like love, my dear brothers and sisters in Christ --- love which bore a very special fruit: the young man was soon Baptized into the Orthodox Faith!

From that glorious day in the Summer of 2001, I have entreated the Patriarch's holy prayers everyday! Now that his soul is in Paradise, may our All-Merciful Lord Jesus grant him the grace to be His Good Samaritan to all of us --- healing the wounds in our souls, and giving us the grace to - at least in some small way - become vessels of compassion to our wounded brothers and sisters.

BLESSED PATRIARCH PAVLE, PRAY FOR US!

After hearing Serbian Orthodox Patriarch Pavle I, who has just died in his 96th year, praised as an “ecumenist” by the Pope and a “man of peace” by the German Catholic Archbishop Robert Zollitsch, Gesellschaft für bedrohte Völker (GfbV) / Society for Threatened Peoples (STP) has expressed regret that the Serbian Orthodox Church’s Patriarch has escaped mortal judgment.

GfbV/STP President Tilman Zülch observed that “Pavle maintained very close and friendly relations with the two major Bosnian Serb war criminals Ratko Mladic and Radovan Karadzic during the time when they were imprisoning more than 200,000 Bosnian Muslims and Catholics in concentration and detention camps and 20,000 Bosnian Muslim women were being systematically raped”. The Patriarch remained silent as Serbian troops commanded by the two war criminals destroyed centuries-old mosques and madrassas (a total of 1186) and over 500 Catholic churches and other religious buildings.

Throughout Serb-occupied Bosnia only a single mosque was left standing. Pavle, who conferred his blessing on the war criminals on a number of occasions, later sought to gloss over his support for genocide in Bosnia-Herzegovina later with vague declarations in support of peace. Pavle’s macabre involvement is illustrated by the photograph above which shows him blessing Radovan Karadžić (currently before the International Criminal Tribunal at The Hague) and Ratko Mladić (protected for years by the Serbian authorities and the Serbian Army).


“We are still waiting for Archbishop Zollitsch, a child survivor of a Tito concentration camps where thousands of Danube Swabian women and children perished, to show some respect at least for the victims of Sarajevo and Srebrenica”, Zülch added.