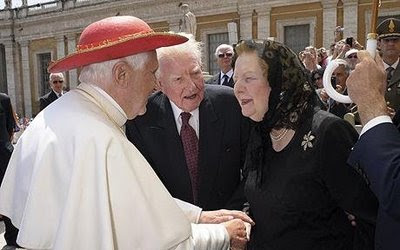 Baroness Margaret Thatcher, who served as Prime Minister of the United Kingdom from 4 May 1979 to 28 November 1990, met with Pope Benedict on Thursday. May 28. She once said, "I am in politics because of the conflict between good and evil, and I believe that in the end good will triumph."

The world’s greatest living Conservative politician has met with one of the world’s greatest conservative theologians. Not as a prelude to conversion: indeed, Carla Powell, who organised the meeting, said: “I think there is more chance of Pope Benedict becoming a Methodist than Baroness Thatcher converting to Rome.”

Margaret Thatcher remains as devout a Methodist as John and Charles Wesley were dedicated Tories. And, unlike Tony Blair, she did not presume to proffer advice on how His Holiness ought to run The Vatican or adapt his theology to accommodate the tastes and fashions of the modern era. From reports, the principal topic of conversation appears to have been her endorsement of a Gordon Brown policy.

No, Baroness Thatcher has not lost her marbles. She simply reiterated the Prime Minister’s invitation for His Holiness to visit the United Kingdom. In an election year, this would be very useful to him, if only so he could bask in a little reflected (though quite undeserved) glory. The ‘feel-good’ effects of a Papal visit coinciding with the imminent beatification of Cardinal Newman may persuade thousands of disaffected and disillusioned Roman Catholics to return to the Labour fold.