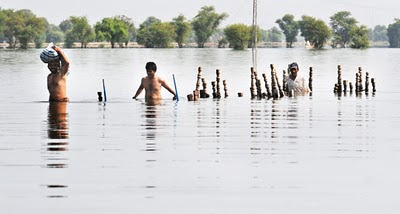 DADU: Water gushing out of seven breaches in Khuda Wah on Sunday reached the Johi embankment – the last line of defence of Sita Road town. At least 35 villages and three link roads have been inundated.

Parya village, about a kilometre from Sita Road, has gone under water.

The breaches in Khuda Wah have now widened to 500 feet.

Mr Imran Zafar Leghari said that because the water was not allowed to flow through the area between the Main Nara Valley (MNV) drain and Suprio Bund, it entered the town of Khairpur Nathan Shah and was now threatening Sita Road. About 70 per cent people have moved out of the town. There was no transport and people leaving the town are finding it difficult to move to safety.

About 10,000 people of Khairpur Nathan and Mehar talukas perched on the Johi embankment are facing a shortage of food, drinking water, medicines and tents.

MEHAR:
The breach in the Suprio Bund at village Mochi has widened to 100 metres. Hyderabad GOC Maj-Gen Shaukat Iqbal visited the area and directed army officials to rescue people stranded in flooded villages.

The local administration cut the Mangwani-Mehar road at three places to divert water and save Mehar.

JOHI:
Water flowing from breaches in the MNV drain at Pir Mashaikh and Chappar Khan Jamali has inundated over 10 villages and is now testing the strength of the embankment around Johi town.

Sources are of the opinion that the embankment may not be able to withstand the pressure. Irrigation officials and local administration personnel are not in the area and residents themselves are fortifying the weak points of the embankment.

The Johi-Bhan road and Johi-Dadu roads are also under water.

According to the head of the irrigation information cell, Sher Mohammad, the lake has risen to a level of 113.3 feet, and discharge at the MNV drain at zero point was recorded on Sunday at 6,500 cusecs, a big increase from 550 cusecs on Saturday.

The town has a population of 60,000 and officials fear that floodwaters will breach surrounding embankments unless they are quickly strengthened.

“I have been stranded here with at least 10 other villagers since yesterday after water inundated our village and we immediately need help and food,” said Usman Qureshi, a resident of a small village near Khairpur Nathan Shah.

Qureshi, who took shelter at the lone two-storey building in the village, told AFP by mobile phone: “We need help, water and food... We beg you to please contact rescuers and ask them to evacuate us.”

These NASA photos of the flooding in Pakistan are astonishing.
http://earthobservatory.nasa.gov/IOTD/view.php?id=45393&src=eor...
Posted by Alice C. Linsley at 5:44 PM