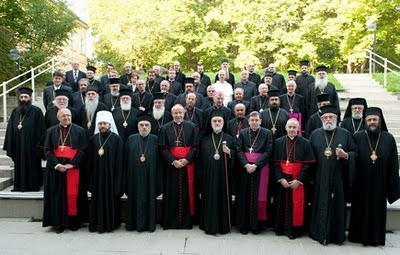 The 12th Session of the Joint Theological Commission for Dialogue Between the Roman Catholic Church and Orthodox Churches began its work on 22 September 2010 in Vienna. The commission is co-chaired by Metropolitan John of Pergamon, Patriarchate of Constantinople, and Archbishop Kurt Koch, president of Pontifical Council for Promoting Christian Unity.

The first day was mainly devoted to the methods of further work on the theme ‘The Primacy of the Bishop of Rome in the First Millennium’. Participants exchanged views on the status to be given to the document on this theme, which was partly considered by the previous meeting of the Commission.

In the evening, Vienna Burgomaster Michael Haupl gave dinner in honour of the participants in the session.

The 12th session of the commission will work till September 26.

Email ThisBlogThis!Share to TwitterShare to FacebookShare to Pinterest
Labels: church and church