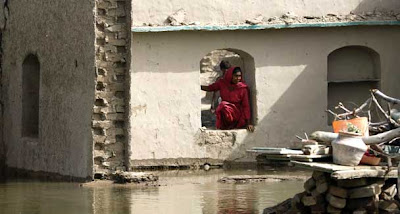 DADU: At least eight breaches developed in the Manchhar lake’s embankment near Zero Point of the Main Nara Valley (MNV) drain on Thursday, inundating 75 villages, the runway and portions of the Shahbaz Airport’s building in Sehwan and major parts of Bubak town.

Bubak and Dal areas of Sehwan Sharif and Johi talukas were the worst affected by waters gushing from the breaches.

The waters breached an eight-foot high embankment around the airport.

The Sehwan Sharif-Bhan Syedabad Indus Highway was inundated and the main station of the Pak Arab Refinery (Parco) in Bubak town was under threat.

The water pressure caused breaches at six places in the lake’s embankment between Zero Point of the MNV drain and 100RD (reduced distance) of Manchhar. The breaches widened from about 50 feet each to 200 feet by the evening.

Two more breaches of 100 feet developed in the evening between RD99 and RD100.

About 100,000 cusecs of water was flowing through the breaches towards populated areas of Dal and Bubak union councils.

In addition to local people, irrigation officials also fled from the embankment and moved their machines to Sehwan Sharif.

The high flow of water was also eroding the embankment and several other places.

An affected villager, Manzoor Jamali, alleged that a rift between legislators belonging to the PPP from Dadu and Jamshoro had resulted in inundation of vast populated areas.

People of Dal area have started shifting their families to Dadu and Sehwan Sharif on donkey and camel carts.

Jamshoro Executive District Officer (Revenue) Sohail Adeeb Bachani said that an area of Sehwan Sharif taluka, having a population of about 130,000 would be affected by the floods. The figure was based on the census carried out in 1998.

He said the displaced people were being shifted to relief camps in Sehwan town and adjoining areas.

Floodwaters were surging towards the Bhan Syedabad-Sehwan Sharif Indus Highway after inundating the Chhinni link road and reaching the right bank of the Indus link canal.

People in Bhan Syedabad, a town of about 100,000, have built walls in front of their homes and shops. About half of the populace have left the town.

INDUS HIGHWAY: A heavy swell of water from Manchhar through a cut made at RD11 to 12 of the dyke reached the Indus Highway, near Sehwan, after submerging small railway bridges on the Sehwan Sharif-Bhan Syedabad tracks.

A portion of the highway, near Qadir Bakhsh Bhalai village, was also submerged.

A special train was arranged to shift people from Bhan Syedabad to Sehwan.

Sindh Chief Minister Syed Qaim Ali Shah visited Sehwan Sharif along with Irrigation Minister Jam Saifullah Dharejo and held a meeting with elected representatives of Jamshoro district and officials. He was briefed on the situation by Irrigation Secretary Shuja Ahmed Junejo.
A large number of affected people of Ahmed Babar village held a demonstration at Dadu’s new bus stand and blocked the Indus High- way for about two hours in protest against lack of relief supplies.