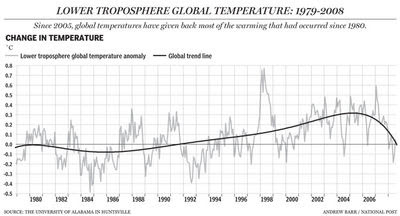 Al Gore slammed Sarah Palin during an interview with NBC's Andrea Mitchell today. He said "the deniers are persisting in an era of unreality. The entire North Polar ice cap is disappearing before our eyes ... what do they think is happening?"

Well, that's true, but what about the fact that average global temperatures have been falling since 2004?  Let's answer the question.

And what about the fact that the glaciers at the opposite end of the Earth are growing?  Interesting how selective Mr. Gore is in the information he provides. Antarctica has more sea ice now than 30 years ago. Ice levels had been lower throughout much of 2008, but rapidly recovered in the last quarter of that year. In fact, the rate of increase from September 2008 onward is the fastest rate of change on record, either upwards or downwards.

How do you explain that, Mr Gore?  Its due to rebound.  The Earth's cycle of climatic change is complex and still beyond our grasp, but we are learning.  It helps when we consider the facts objectively.  That's what science does.

And what about the fact that the Sahara is greening?

Here is yet another example of Sarah Palin being on the peoples' side.  As Michael Barone has noted:  when it comes to global warming, "the elites of academe, the media and big business have been solidly on one side for years."  He points out that "the American public has been moving in the other direction."
Posted by Alice C. Linsley at 3:05 PM

Email ThisBlogThis!Share to TwitterShare to FacebookShare to Pinterest
Labels: globalism