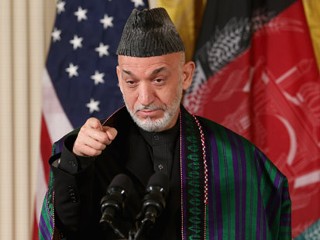 Afghan President Hamid Karzai has repeated his call for Taliban to give up militant activities and join the Kabul government-led peace process in Afghanistan.

'Come and serve your soil and put down the weapon which the stranger has put on your shoulders and that you kill your people with. Put it down and serve your people,' Karzai in his Eid al-Fitr message on Thursday, marking the end of the holy fasting month of Ramadan.

He said the militant group was pursuing the interests of foreigners in the war-torn country.

The president added that the militants were humiliated in recent peace talks held in the Qatari capital of Doha. 'You have witnessed this during the opening of the Qatar office, you were guests and not the owner. You were guests but you were not honored. Your flag and sign were raised and then immediately taken down.'