USA Economy: Warning! Things are worse than you imagine 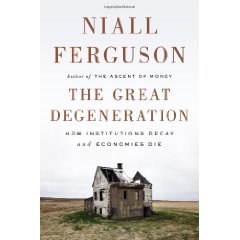 
If you suffer from melancholia, or display other symptoms of clinical depression, you might want to skip reading Niall Ferguson’s The Great Degeneration: How Institutions Decay and Economies Die. For the rest of us, it is an essential grounding in the daunting realities facing the current and future generations of the Western democracies, especially the United States.

Ferguson, a Scottish transplant to Harvard and a senior fellow at the Hoover Institution, based this book on his 2012 Reith Lectures for the BBC. Warning: Things are even worse than you thought.

Ferguson’s short, articulate, and powerful book describes a quartet of pathologies plaguing the United States and most Western countries: “democratic deficits,” “regulatory fragility,” the “rule of lawyers” rather than the rule of law, and an “uncivil society.” Ferguson believes these conditions have contributed to making the US a “stationary state,” a term coined by his countryman, Adam Smith. This has led to “a shocking and perhaps unparalleled breach” of Edmund Burke’s partnership which the great Anglo-Irish conservative described as “not only between those who are living, but between those who are living, those who are dead, and those who are to be born.” Ferguson relies heavily on contemporary scholarship but also draws on the intellectual legacy of the formidable triumvirate of Smith, Burke, and Alexis de Tocqueville.