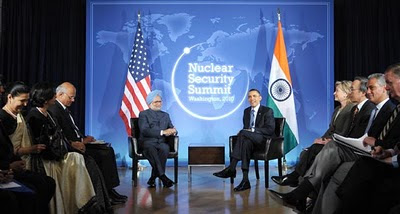 WASHINGTON: Indian Prime Minister Manmohan Singh met US President Barack Obama on Sunday, conveying his country’s concerns over American military aid to Pakistan and over the situation in Afghanistan.

Although the talks, held ahead of a two-day nuclear summit in Washington, focused on nuclear security, India’s relations with Pakistan and Islamabad’s growing stature in Afghanistan also figured, Indian officials said.

President Obama walked across the White House to meet the Indian prime minister at the Blair House, the US President’s official guest house. It was their second meeting in five months.

Prime Minister Yousuf Raza Gilani was to meet the US president a few hours later. The US wanted a trilateral meeting, but the Indians refused to participate in direct political talks with Pakistan. They also refused to hold bilateral talks with the Pakistani leader.

Officials briefing the Indian media on the meeting said Mr Singh repeated India’s request for the extradition of Pakistani-American suspect David Coleman Headley, who is accused of plotting the Mumbai terror attacks. India wants direct access to the suspect.

Mr Singh also conveyed to Mr Obama India’s apprehensions over the end-use of the US military aid to Pakistan.

India claims that US military supplies and financial assistance to Pakistan are often used against Indian interests.

He also shared his concerns over the situation in Afghanistan with the US president.

Mr Singh informed President Obama that India would continue to play its role in Afghanistan as it had vital interests in that country.

Indian officials said New Delhi had made it clear that it would stick to its commitment in Afghanistan “with or without America” as it had crucial stakes in the stability of the country on its periphery.

India has been involved in a number of developmental projects in Afghanistan and has vowed to continue with them despite frequent attacks by Taliban on its interests there.

The officials said that India’s policy on Afghanistan would be determined by its own interests and not by what others did.

They noted that India and the US had common goals in Afghanistan and wanted to stabilise that country.

The bill is caught in a political quagmire in India with opposition parties strongly objecting to certain aspects of the proposed legislation.

The US has been pushing for an early passage of the bill by the Indian parliament, pointing out that American companies are feeling left behind in the race for nuclear contracts in India as other major players from countries like France and Russia have already signed deals with New Delhi.

Headley, the US-born son of a former Pakistani diplomat and American woman, has pleaded guilty to surveying targets for the 2008 bloodbath in Mumbai. US prosecutors in exchange agreed he would not face extradition to India or the death penalty.

Foreign Secretary Nirupama Rao said Singh asked for access to Headley. “He was fully supportive of our request for provision of such access,” Rao told reporters.