My home state of California is facing the worst drought in four decades. The chart below, released by the National Drought Mitigation Center, shows extremely low soil moisture levels with the dark brown. 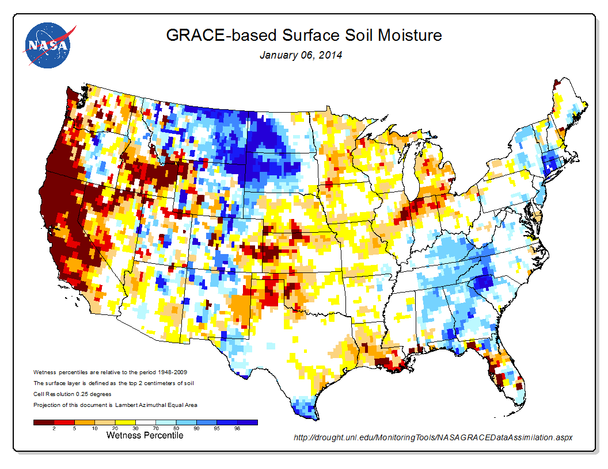 Gov. Jerry Brown declared a drought state of emergency on Tuesday, asking Californians to cut back on their water consumption by "at least 20%" as the state faces its driest year on record.

"We ought to be ready for a long, continued, persistent effort to restrain our water use," he said at a press conference, according to the LA Times.

The drought has contributed to the spread of the Colby Fire burning in Glendora, which was is thought to have been sparked by an illegal campfire on Wednesday. So far, 1,700 acres are charred and 1200 firefighters are working that fire. The fire has spread rapidly due to dry and windy conditions.

The fires are spread by the Santa Ana winds which come down off the mountains and bring drier conditions. Two small brush fires broke out in Pacific Palisades and Topanga.

For weeks, naturalists and farmers have been lobbying the governor to take action. Reservoirs across the state have hit record lows and water rationing is now a fact of life in many communities. The Sierra Nevada Mountains have a near record low snowpack for this time of year. The lack of snow at Lake Tahoe and in the Sierras suggests that this summer will be one of the worst for fires in California.


California and parts of western Oregon experienced their driest year on record in 2013, according to statistics from the National Weather Service (NWS).  San Francisco, Los Angeles, Sacramento, Fresno, and the Oregon cities of Medford, Salem, and Eugene have already broken their previous records for dryness in 2013.