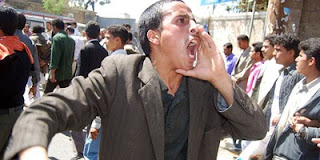 SANA’A, Mar. 1 — Tens of thousands of anti-government protesters gathered in ‘Change Square’ outside of Sana’a University as protests entered their nineteenth day.


Last Tuesday, ‘Change Square’ witnessed ‘a day of anger’ that was staged in solidarity for people killed by security forces this week because of their participation in protests against the regime.

The anti-government protesters were chanting, clapping and dancing while large speakers broadcast enthusiastic music. Hundreds of tents have been erected. The walls and tents are hung with cartoons and slogans that denounce President Ali Abdullah Saleh as corrupt and a thug.

Protesters waved Yemeni flags and some of them climbed up light poles and billboards to chant enthusiastically against the president. Female protesters were also taking part in the demonstration.

“This is the only place I can express my opinion without being monitored by political or national security. When I see those eager protesters, I realize that the regime will be overthrown by those heroes who come here spontaneously,” said Ali Abu Lohoom, a youth activist.

“I don’t want a job or money. I want the president to step down,” he said.

Abu Lohoom denounced the recent speeches by the president as ‘stupid’. “Our president is dying,” he said.

Redwan Masood, head of Yemen Student’s Union, told the Yemen Times that there are cases of enforced disappearances of students and protesters by security forces.

“Some injured protesters are afraid to go to hospital because they know that security forces will detain them,” he said.

Adel Al-Osaimi, an activist in the ruling party and secretary-general of the Yemen Student’s Union, said that all the students of Sana’a University refuse the opposition’s protests and call for stability. He said during a public meeting with the president in Sana’a last Tuesday, that anti-government protesters want the university to be a theater for their demagogic actions.

However, Masood challenged the ruling-party officials to bring ten students to support the president. “They have no student base. All students are eager to make change,” he said.

Sa’ad Al-Abasi, 17, came to the anti-government protests from Sahrab district in Taiz governorate to participate in the day of anger.

“I’ve come to overthrow our corrupt president and his regime. The deadline for the president leaving is next Friday,” he said.

“There is no legitimacy for the ruler who is not acceptable to the people,” Al-Zandani told protesters last Monday.

Counter-protests have taken place in Al-Tahrir Square where thousands were chanting for President Saleh. Witnesses said that the pro-government protesters came by buses provided by officials of the ruling party.

An employee in the public service, who wishes to remain anonymous, told the Yemen Times that his employer forced employees to attend pro-Saleh protests in Al-Tahrir Square. He said that employers provide buses, flags and pictures of the president for employees to carry.

“They threaten employees with being laid off. I’ll not go to any pro-government protests, and I’m not afraid about the results of my decision,” he said.

From Yemen Times
Posted by Alice C. Linsley at 3:56 PM