Mubarak's Call for Dialogue Too Late? 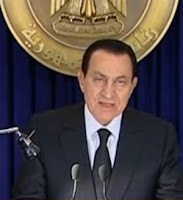 ﻿
28 January 2011- Egypt's President Hosni Mubarak finally appeared on national tv, saying he understood the "suffering of the people" and promising dialogue with an aim of democratising Egypt and fight poverty.

The 83-year-old, looking self-confident during his long-awaited public appearance, apologised for the use of force during the massive protests all over Egypt today. But he also warned against "chaos, destruction and looting" in the wake of the protests.

Mr Mubarak urged for a national dialogue to mend the conflict during the protests. He admitted problems regarding lack of freedoms, corruption and widespread poverty, calling for a dialogue to address these problems.

While President Mubarak made it clear he would stay in power and "assure the security of Egyptians," he also announced the resignation of his entire government. Making the current cabinet mostly responsible of the "sufferings" in Egypt, he promised to announce a new government, "fresh hands", tomorrow.

But he also indicated that it was exactly the "freedoms" he had admitted Egyptians over the last years were responsible for the "chaos" now unfolding. The line between freedom and chaos was fine, he pointed out.

The speech, expected five hours earlier, came as rumours were spreading the President already had left the country. Reports from the Cairo airport recently had confirmed that three private jets were leaving the otherwise closed facilities under great security efforts.

The many protesters still controlling the streets in Cairo, Alexandria, Suez and other cities were immediately made aware of President Mubarak appearing on all Egyptian broadcasters. For a moment, the streets of Cairo became quieter.

But as the speech went on, the masses again started chanting against the President. "Down, down with Mubarak," the chants went, stronger and stronger. The presidential message seemingly made little impression, rather than ruining the illusion of Mr Mubarak already having left the country.

His promise to dismiss the government also made little impression on the crowds as President Mubarak himself is known to hold all powers in the country. There are therefore no signs that the appearance of Mr Mubarak would ease the pressure against him.