Trapped in a Web of Punditry 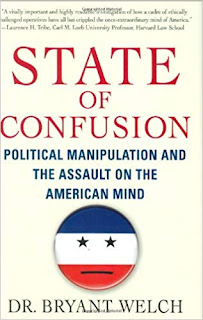 The citizens of the United States of America are facing what promises to be another contentious presidential election in 2020. We can expect heated rhetoric and further polarization. The election campaigns will be flashy and pander to fears on all sides. Opponents will be presented in the most unflattering way, with suggestions and accusations of deceit, corruption, and bigotry. The discourse will reach a moral and intellectual low, and the usual gaslighting will occur.

The term "gaslighting" is taken from the movie, Gaslight, in which Charles Boyer manipulates and confuses the mind of Ingrid Bergman. This type of manipulation is found inside both political parties and doubtless it will occur more frequently in the months ahead.

Gaslighting aims at causing confusion in the minds of the public. Confusion makes it difficult for people to make informed decisions. The gaslighter seeks to impose his narrative to prevent people from perceiving the reality. Dr. Bryant Welch writes about this in his book The State of Confusion (2008). He argues that various forms of political manipulation undermine the nation's ability to confront real problems.

Thinking people will be able to cut through the confusion, but few will be able to communicate the reality to others in a clear and concise way. In part, this is because we fall into the traps. We use the language of political slogans instead of simple English. We are caught in a web of punditry.

Punditry involves opinions more than data and resembles entertainment more than reporting. It dominates the mass media, and the examples are often ludicrous. As Dorothy Sayers pointed out in her famous speech "The Lost Tools of Learning" (1949) modernity has produced a climate favorable to bishops airing "their opinions about economics; biologists, about metaphysics; inorganic chemists, about theology; the most irrelevant people are appointed to highly technical ministries; and plain, blunt men write to the papers to say that Epstein and Picasso do not know how to draw."

To further complicate matters, there is a deficit of articulate communicators who hold telling the truth as their first priority. I am reminded of the sage advice Wendell Barry gave to my writing students. He wrote:


The first obligation of a writer is to tell the truth--or to come as near to telling it as is humanly possible. To do that, it is necessary to learn to write well. And to learn to write well, it is necessary to learn to read well. Reading will make you a better writer, provided you will read ever more attentively and critically. You will probably read a lot of contemporary writing in your textbooks, in magazines and newspapers, in popular novels, etc. The contemporary is inescapable. You may more easily escape the writing that is most necessary to you. I mean the books we know as "classics," books that have been read for generations or for centuries and so have proved their excellence.

The first obligation of a communicator should be to tell the truth, and in order to do that, the communicator must read, think, analyze, pay attention to details, and make distinctions. Unfortunately, less than truthful narratives dominate the public domain, and obfuscation has become an art in the political arena.

If there is an antidote to the poison, it must involve turning off the pundits, reading to learn, telling the truth, and taking responsibility for oneself.