An Ethical Consideration of Aliens 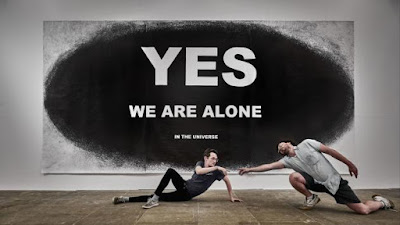 
I work at the intersection of Philosophy and Science. The first discipline requires an open mind and the second requires that my mind clamp down on hard data. Both are helpful when considering aliens and unidentified flying objects (U.F.O's). There is no hard data to prove the existence of aliens and U.F.O's, and yet the obsession persists.What motivates the obsession?

It has been suggested that the Media keeps the obsession alive. This is the view of the journalist Keith Kloor in his article "America’s Enduring Obsession With UFOs: How the media keeps extraterrestrial infatuation top of mind."

Another explanation for the longevity of the UFO-alien obsession is cult-like groups. According to William H. Swatos, Jr, many of these groups have a religious quality. Swatos explains:


To their alleged encounters, "contactees" such as George Adamski and Orfeo Angelucci attached religious meaning, which often incorporated spiritualist and theosophical principles with apocalyptic and millennialist themes. These themes reflected growing American cultural fears of communism and nuclear destruction, combined with faith in the salvific nature of technology. Masonic and Rosicrucian ideals and rituals also appeared within some of the early groups and, most recently, in the Order of the Solar Temple. Contemporary UFO groups additionally borrow from "New Age" and Christian doctrines (as did Heaven's Gate) as well as from the general science fiction milieu. The range of beliefs among these groups is quite wide, including people who claim to have seen UFOs, alleged contactees, alleged contactees who have visited ships or other worlds, reputed victims of alien experimentation, and alleged aliens who live among humans.

In another article by Keith Kloor he asks, "A community of believers in extraterrestrial visitations continues to push its story, and the media and Pentagon continue to listen. Who benefits from these tales of close encounters?"

The speculation gains legitimacy when the Navy issues guidelines for reporting UFO's. In an age when people read only the headlines and the headlines are often misleading, few will note that the Navy is not acknowledging encounters with alien spacecraft. Rather, it is acknowledging the importance of recording unusual sightings by trained military personnel.

Perhaps some people follow alien lore as a way of gaining attention. Attention seekers thrive by keeping a speculative conversation going, and there are attention seekers in every arena of society. Add an element of conspiracy and religious indignation, and the movement is bound to draw followers.

Claire Coffey finds that what was once a fringe belief system has taken hold of the imagination of many. The religion of the UFO is also the religion of technology and is disseminated and popularized through the narratives of Star Wars, 2001: A Space Odyssey, and The X-Files. She sees this as a new religion with adherents as loyal as Roman Catholics who claim to have had visions of the Virgin Mary.

In an attempt to find legitimacy in the Bible, some insist that the Nephilim of Genesis 6:4 refers to aliens. Here we have a case of selective reading or what some call "cherry picking" biblical passages. The verse makes it clear that it refers to men, not aliens.

The Nephilim were on the earth in those days—and also afterward—when the sons of God went to the daughters of men and had children by them. They were the heroes of old, men of renown.


The nephilim were powerful early rulers, also known as gibboriym, which means the mighty ones. They are also called "the mighty men" of old in Genesis 10. Further, the term "nephilim" comes from the same root as the Aramaic npyl (nephil) which means great in rank or stature. This is equivalent to the Arabic nfy, meaning hunter. It is said concerning Nimrod that he was a “mighty hunter” or a “mighty man” before the Lord.

Since there is no hard evidence for aliens and U.F.O's, how should one respond to those who adhere to this belief? Humoring is perceived as condescending. Confrontation is likely to stir antagonism. People don't like to have their worldviews challenged. Empirical reasoning is useless since the worldview of adherents is a substitute for empiricism.

In today's world one may discuss ethical encounters with aliens. It is time we talk about ethical engagement with alien-embracing religionists.