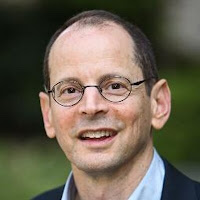 Gay activist Jonathan Charles Rauch describes himself as "an unrepentantly atheistic Jewish homosexual" which is to say that he has completely rejected the traditional wisdom of his ancestors.

Jonathan Rauch is so lacking in critical thinking skills as to be dangerous. Rauch’s “Case for Gay Marriage” is full of fallacious arguments, as I have demonstrated to my Ethics students.

This assumption is not true. It is, in fact, verifiable false since we are able to observe that reliable caregivers exist who are not married to the people to whom they provide care. In fact, some paid caregivers are superior in their reliability than some spouses.

Marriage is necessary to tame men.

This assumption is hypothetical and unverifiable. The term "tame" has not been defined. Does it mean to make men more effeminate? Does it mean they learn to cook and clean? Does it mean that the responsibilities of marriage tend to mature a man? Why should this apply to men only? Are all unmarried men untamed? Are all married men tamed?

Therefore, marriage is equally necessary for heterosexual and homosexual couples.

His conclusion is not valid. Rauch’s premises are not verifiably true, so this is not a sound argument.

Further, his conclusion does not logically follow from his premises, so this argument is not valid. Lacking true premises and a valid conclusion, Rauch’s argument is said to be “fallacious” or logically false. Time to call him out on his poor reasoning!

Rauch is a product of a society that is not able to discern legitimate expertise from popular pulp and:


Has lost the ability to use the library.

Fails to define terms and intentionally abuses language, making words mean whatever one wants them to mean.

Confuses fact and opinion, or the proven and the plausible, in the media and in public discourse.

Uses sophistry in public debate, rather than logical rhetoric.

A government that addresses mostly irrelevant matters to form public policy based on "diversity" and assertion of rights.

Has become so specialized that Americans are unable to make connections between the disciplines or integrate learning, which is a mark of true education.

Has produced thinkers who fail to adhere to the basic principles of logic, thus presenting speculation as facts.


Related reading:  The Moral Revolutionaries Present Their Demands: Unconditional Surrender; Why Many People Are Resorting to Anger in Debates