Battle for Kramatorsk Over 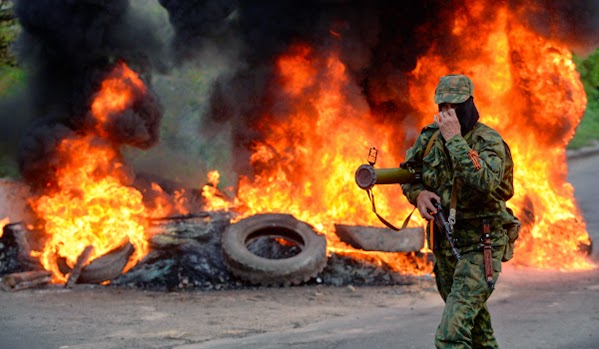 3 May 2014, 05:18 -- The evening battle for Kramatorsk in Ukraine's southeast has ended, leaving one defender of the city dead and nine others wounded, RIA Novosti reports. According to the agency's source, the Ukrainian army column was unable to enter the city. Hostilities broke out in the Yasnogorka area on Friday evening. The Ukrainian armor column blocked by civilians the day defore, decided to go on a break. "They were afraid that we would take away their weapons or armored vehicles," said one of the locals. There is no information about the losses in the Ukrainian army yet.

During the battle in Kramatorsk civil alert sirens were turned on, which hadn't happened in the morning, during the fight in the city of Slavyansk, 12 km from Kramatorsk. Eyewitnesses also reported that Ukrainian soldiers captured one of the militia checkpoints between Slavyansk and Kramatorsk during the day. It is reported that there will be no public transportation between the cities and within Kramatorsk tomorrow. No buses will be provided for workers from local factories, even though they have a continuous cycle of production. People finishing the night shift will have to go home by foot.

After the evening battle near the entrance to the southeastern city of Kramatorsk Friday evening, the city hospital has reported 10 individuals have been wounded and one dead. Earlier it was reported that after the attack in Kramatorsk the number of injured and dead went into the dozens and they were taken to hospitals in Kramatorsk and Slavyansk. In an area between the two cities in Yasnogorki peaceful civilians blocked a column of between 10 and 14 armored military vehicles and other equipment.

After dark set in, they took action and began firing trace bullets from semi-automatic weapons.

"We received 10 injured with bullet wounds. There are seriously injured and some with lighter wounds. At least on woman (aged 36), an activist, is among them. Unfortunately, one died," doctors told RIA Novosti.

Ukrainian armed units had begun storming positions of the self-defence force in the city of Kramatorsk, the Donetsk region, a Russia 24 television correspondent reported.

The special operation also resumed in Slavyansk a few hours ago.