Required reading for Ethics and Religion 285

He it is who has sent His Messenger (Mohammad) with guidance and the religion of truth (Islam) to make it victorious over all religions even though the infidels may resist. Quran 61:9

Muhammad was born in Makkah (Mecca) in AD 570.  His father Abdullah, son of Abdul Muttalib, died before his birth and his mother Aminah (daughter of Wahhab, the son of Abd Manaf, the son of Zahrah) died when Mohammad was six years old. Aminah was of the Bani Qureish (Quraysh tribe) and Mohammad belonged to the Hashim clan of the Quraysh tribe. (As noted by the French anthropologist Claude Lévi-Strauss, in a patrilineal kinship system, mother and son do not always belong to the same clan.)

After his mother’s death, Mohammad’s paternal grandfather Abdul Muttalib took care of him for 2 years. At 8 years of age, Mohammed was taken in by his uncle Abu Talib who did nothing to educate the boy. Mohammad was raised illiterate, and remained unable to read or write until his death. Islamic fundamentalism continues to distain formal education.

Abu Talib was of the Quraysh tribe. He never accepted Mohammad’s new religion. The first to accept Mohammad’s beliefs were his wife Khadijah, his cousin Ali son of Abi Talib, his friend Abu Bakr and Abu Bakr’s wife. Mohammad’s original followers numbered only about 40 people and all were related. At first they met in secret.

In AD 595 Mohammad married Khadijah, a wealthy merchant of Mecca. He was 25 years old and she was 40 years old. Mohammed was her third husband.

Mohammed left Mecca in 622 after the Meccan chiefs attempted to kill him. He went to Medina (Yathrib). The town had a population of roughly 10,000 people when Mohammed arrived. Word of his prophetic utterances had gone before him and he was greeted by the common folk as a prophet, many urging him to stay in their homes which they believed would bring a blessing upon their households. 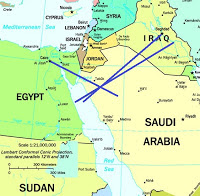 Compared with arid Mecca, Yathrib was a paradise with lush gardens, date-palm groves, and productive farms. It is situated on the western edge of the central Arabian plateau in the heart of what the Bible calls Dedan. Dedan is named for a descendant of Kush. The highest concentration of Old Arabic scripts has been found in Dedan and the oldest mosques in Baghdad and Cairo were originated aligned to Dedan. Genesis 10:7 tells us that Dedan was a grandson of the Kush by his son Raamah. 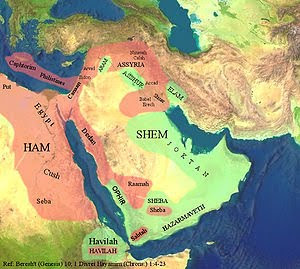 The oldest mosques in Cairo and in Baghdad are aligned to a point in Dedan, about 500 miles north-northwest of Mecca.

Dedan is a name found among Abraham’s descendants in association with Abraham’s first born son Joktan (Yaqtan). Josephus knew him as Joctan and his name is preserved in the ancient town of Jectan, near Mecca.

The sub-clade ZS227 includes the Kohanim (priest) haplotype and it is found among some Jews and some Arabs, further evidence of a common patrilineage. The Yaqtanite (Jokanite) clans still reside in southern Arabia. 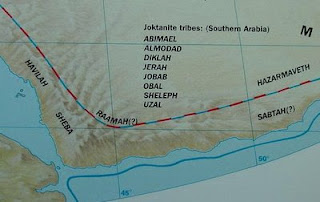 Genesis 10:26 tells us that Joktan had 13 sons. Almodad appears to be the first-born. If Joktan followed the pattern of his fathers, his two wives would have maintained separate households on a north-south axis. The sons of his concubines would have been sent away to the east and to the west. This may be the meaning of Genesis 10:30 which describes the Joktanite territory as extending "from Mesha [Mecca?] all the way to Sephar in the eastern mountains (Zafari or Dhofar on the Gulf of Oman?]."  The Lebanese scholar Kamal Salibi thought this might be so. Mesha is the name of the Moabite ruler whose celebrated victory over Israel is written on the Mesha stele found in 1868. According to Salibi, Mesha is an Arabian word and Moab was a village near Mecca. The modern road from Mecca to the Gulf of Oman runs west to east, just south of Riyadh.

In Medina, Mohammed built an open-air mosque with a shaded area to the south called the suffah and he aligned the prayer space facing north towards Jerusalem. Adjoining this mosque on the east and west were chambers for Mohammed’s two wives Sauda and Aisha. As with Lamech (Genesis 4), Mohammad set his wives on an east-west axis. The Bible scholar Theodor Gaster notes that the names of Lamech's wives - Adah and T-zillah - relate to the words for dawn and dust. This rounds out the picture of Lamech's arrogance, for besides bragging about killing a man, he set himself up as an equal to God.

In the ancient world placing your wives on an east-west axis this was regarded as sacrilegious. It represented setting oneself up as the Creator whose emblem the Sun made an arc from east to west. All the great patriarchs placed their wives in separate settlements on a north-south axis. Abraham's half-sister wife Sarah resided in Hebron and his cousin-wife Keturah resided to the south at Beersheba. Both were in the region of Edom and Abraham was related to the Horites rulers of Edom who are named in Genesis 36. 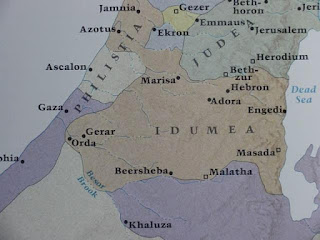 Eventually, as Mohammad gained more influence and greater military strength, the qibla (prayer direction) of the mosque in Medina was oriented to Mecca.

Mohammed added other apartments for women his troops had taken as slaves. One of these was a Jewish girl named Safiya, who had been betrothed to the chief Kinana, who was slain when Mohammed’s raiders attacked the Khaibar Jews in their settlement six days journey northeast of Medina.

Among the people in , there was a small community of Jews that had resided in this area from before recorded history. These Jews agreed to protect Yathrib alongside Mohammed in the event of attack. This agreement is called the Constitution of Medina. It stated that “The Jews shall be responsible for their expenses and the Believers for theirs. Each, if attacked, shall come to the assistance of the other.” It also stated that “The Jews shall maintain their own religion and the Muslims theirs.”

The nature of this treaty is the subject of dispute among historians. Many maintain that it is a cobbling together of oral and written agreements from different periods. Ibn Ishak, an 8th century historian wrote a history for Muslims which includes genealogies representing the Islamic tradition. He appears to be the principal source of information about the Constitution of Medina.

The Banu Kainuka was one of the Jewish clans living in Medina. In 624, they threatened Mohammed's political authority by rejecting his claim to be The Prophet of Allah. Around this time, a Moslem girl visited a goldsmith shop owned by one of the Kainuka Jews. As she sat in the shop a mischievous Kainuka pinned her skirt behind her to her upper dress. When she arose she cried out in shame at her exposure. A Moslem then slew the offending Jew, whose brothers retaliated by killing the Moslem. For fifteen days, Mohammed blockaded the Kainuka Jews in their quarter until they surrendered. He then ordered them to leave without their possessions.

These Jews, who numbered about 700 had lived peacefully among the Arabs for many millennia. Their principal occupation was metal work. They resided in two fortresses at the southwestern end of the Yatrib and they had Arabic names.

Considering himself to be at war with the rulers of Mecca, Mohammad felt justified in removing any hostile elements living in Medina. He attacked the Banu-Nadhir Jews, charging them with helping his enemies and plotting against his life. After a three-week siege, these Jews were forced to leave Yathrib, only this time each family was allowed to take as much as a camel could carry. (A large bull camel can carry up to 1323 pounds (600 kg) and smaller camels up to 882 pounds (400 kg). Mohammed then appropriated their date orchards, and distributed other lands and possessions among his supporters. This is how Islamic conquests are rewarded to this day.

The divisions within Islam today are multiple and the parties often fight against one another, employing terrorist tactics such as suicide belts in busy markets and bombs in mosques. The Wahhabi branch has the most extreme followers. Mohammad’s maternal grandfather was called Wahhab. However, the Wahhabism of today is named after an eighteenth-century preacher and scholar, Muhammad son of Abd al-Wahhab (1703–1792). He was born around 1703 in Najd, a town in the remote north-central desert of Arabia. As a young man he traveled to Medina and to Basra, in southern Iraq. He returned to Najd to preach. Like Mohammad, he had come to the conclusion that he was the recipient of what it means to be a true follower of Allah. He believed that "not one of my teachers" knew the true meaning of "there is no god but Allah."

Abd al-Wahhab insisted that doctrine of tawhid - absolute monotheism, and the unity and uniqueness of God - had been weakened by popular practices as requests for intercession by saints and prophets, worship at tombs and shrines, and superstitions surrounding numbers and the Jinn. He attempted to reform popular Islam, going so far as to advocate execution of idolaters. His focus was on Muslim apostates who should be killed and this includes adherents of Sufism, Muslim mystics.

Abd al-Wahhab's zeal got him kicked out of a number of places, including his hometown. Eventually, he found a patron in Muhammad bin Saud, a chief (emir) of Diriyya, a large agricultural settlement. The two men shared expansionist ambitions and came to a mutually-beneficial agreement. Abd al-Wahhab would be granted protection and control of religious practice in lands within bin Saud's dominion, and at the same time, Abd al-Wahhab would grant religious legitimacy to bin Saud's rule. The alliance eventually became the cornerstone of the present Saudi kingdom, established in 1932.

The Quran contains 109 verses that call Muslims to war against non-Muslims in order to advance Islamic rule globally. Some include commands to chop off heads and fingers. Terrorist acts are encouraged. "If thou comest on them in the war, deal with them so as to strike fear in those who are behind them, that haply they may remember." Quran 8:57


Islamic leaders perpetuate this legacy with an eye to domination. Saudi Arabia is the first source of financial support for the expansion of Islam worldwide. Recently, Saudi Arabia offered to build 200 mosques in Germany. These mosques will become centers of indoctrination and recruitment for Islam’s ambition of global conquest. In Saudi Arabia, the mosque leaders are appointed and paid by the government. They are removed if they instigate rebellion or incite violence. As a democratic republic, Germany will find it much more difficult to monitor activities in the mosques.


Related reading: Abraham's Sons; The Shock of Mohammad Atta's Afterlife; Some Jews and Some Arabs Have Common Horite Ancestry; The Afro-Arabian Dedanites; Facing the Facts About Islamic Extremism; Fictional ISIS and the True Threat

Email ThisBlogThis!Share to TwitterShare to FacebookShare to Pinterest
Labels: Islam