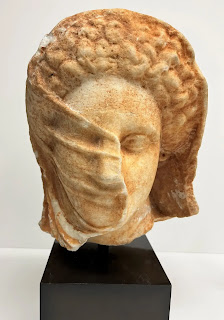 This Hellenistic bust of a veiled woman, dating to 350 B.C. was looted from a temple decades ago, and confiscated from the Met in February 2022. It was returned to Libya.
Five Egyptian antiques collectively valued at more than $3 million, have been seized from the Metropolitan Museum by the New York District Attorney’s Office. The confiscation is part of an extensive investigation into the international trafficking of Egyptian antiquities that led to the indictment of former president and director of the Louvre, Jean-Luc Martinez.
Four of the pieces came from the collection of Roben Dib, a dealer suspected by U.S. and French authorities of selling looted objects to art institutions. Dib is currently detained in Paris, where he is awaiting trial on charges of gang fraud and money laundering. The Met has been contending with its connections to Dib for several years.

Among the artifacts seized were a resplendent Fayum portrait, a painted panel commonly placed over the face of mummies in Roman Egypt. That work depicts a woman in a blue dress and dates to around 60 BC.

The other seized work is composed of five fragments of a wall hanging from the 4th or 5th century AD. They are considered one of the oldest representations of the Book of Exodus.
Read more here.
Related reading: New York Met Returns Ancient Stolen Egyptian Coffin; Ancient Vase Seized from Met on Suspicion it was Looted; New York Met Returns Looted Bust to Libya; Antiquities Thieves Arrested in Israel
Posted by Alice C. Linsley at 4:44 PM