The Etiology of the Cancel Culture 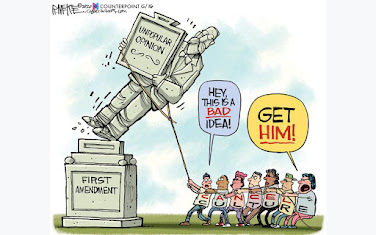 The anthropologist Loren Eiseley wrote about the cancel culture well before the term became popular. The tendency to erase history or efface time has been termed damnatio memoriae. In his 1970 book The Invisible Pyramid, Eiseley explains that this "is frequently done for obscure or depraved reasons." He writes:

Public monuments are effaced,, names destroyed, histories rewritten. Sometime to achieve these ends a whole intellectual elite may be slaughtered in order that the peasantry can be deliberatly caused to forget its past. The erasure of history plays a formidable role in human experience. It extends from the smashing of the first commemorative monuments right down to the creation of the communist "non-person" of today. (The Invisible Pyramid, pp.100-101)

Eiseley writes of times when people grow tired of history and because they cannot remake it, they seek to destroy it. The marks of such times are social disruption and intolerance, what Rocco Buttiglione terms "moral amputation."

G. K. Chesterton observed, "It is the fashion to talk of institutions as cold and cramping things. The truth is that when people are in exceptionally high spirits, really wild with freedom and invention, they always must, and they always do, create institutions. When men are weary they fall into anarchy..." (Manalive, Chapter 3)

Canceling the past involves a hatred of Tradition and attacks on institutions that preserve Tradition. These include museums, churches, and World Heritage sites. In 2016, Islamic iconoclasts blew up a 3,000-year temple at Nimrud in northern Iraq. In Nicaragua, Leftists are burning churches and attacking priests and nuns. The Puritan Oliver Cromwell attempted to erase England's religious history by destroying images and sacred objects in the churches.

Iconoclasm can be an act of restless rebellion, or religious fanaticism, or anarchy. It can come from the Left and the Right. Effacing history may take the form of a rioting mob or an academic who projects Western civilization as so corrupt that his students feel justified to denounce it. The academic Michel Foucault attempted even to cancel Man.

Canceling the past denies a voice to the ancestors and expresses disdain for the dead. As Chesterton noted, “Tradition means giving votes to the most obscure of all classes, our ancestors. It is the democracy of the dead. Tradition refuses to submit to the small and arrogant oligarchy of those who merely happen to be walking about.” (Orthodoxy, Chapter 4)

The effacers of history have shown themsleves to be self-indulgent and reckless. The Antifa agitators demonstrated in recent months that they do not care that innocent people are injured and private property destroyed or damaged. It was reported that some Muslims in New York applauded as they watched the Twin Towers collapse. Some of the most prominent leftists of the 1960s and 70s were exposed as self-indulgent hedonists in Christopher Lasch's The Culture of Narcissism. Lasch "understood that what presented itself in the lineaments of radical consciousness-raising in the 1960s and 1970s was mostly a blind for moralistic self-indulgence."

Loren Eiseley speaks of the time effacers in Western culture as "broken men" who "engage in an orgiastic and undiscriminating embrace of the episodic moment..." (The Invisible Pyramid, p. 111).

Related reading: When a Riot Becomes a Revolution; On Trusting the Elites; Another Look at Michel Foucault; Liberty and Justice Cancelled