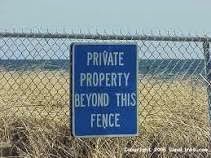 Let me present a contrast between an ownership lifestyle and an access lifestyle.

Exhibit A for the ownership lifestyle is my late father-in-law Ben. Following his marriage in 1946, he built not one, but three different small houses with his own hands, selling each one and building another while holding down surveying and drafting jobs. Once he found steady employment with the Texas Highway Department, he bought a new contractor-built house in a growing subdivision and a new 1955 Oldsmobile, which he still owned when he died earlier this year.

From that point on, he lived the American dream of ownership. Anything he needed and could afford, he bought: TVs, lawnmowers, appliances, and (much later in life) computers for his wife to pursue her genealogy hobby with.

Contrast that lifestyle with that of a hypothetical 30-something single living in Austin—call him Brad. He rents a stylish apartment near the Metro rail that he rides to work, so he doesn't own a car. He calls vehicle-for-hire services like Uber when he needs to go anywhere that he can't get to in the city with public transportation.

His biggest single expenditure this year was for a three-week European tour with some friends. His most expensive single possession is a mechanical watch. Brad spends most of his discretionary income on experiences and services rather than things. He pays for access, not for stuff.

Brad is part of the reason that rates of new-vehicle ownership, home ownership, and even possession of a driver license are all declining in the age group of U. S. citizens centered around 30, according to an article by James Poulos in a recent issue of The New Atlantis, “Losing Liberty in an Age of Access”. Poulos is concerned that the decline of ownership among young people will lead to a corresponding decline in freedom. Will it?

Before exploring that question, we should admit that technology has played a major role in the rise of the access economy. Technically, software is leased, not owned. "Buying" software (already a fading trend in contrast to ongoing service contracts favored by many software firms) really just gives you the privilege of using it. The planned obsolescence of many products, whose useful life is measured in months rather than years, is enabled by rapid advances in digital technology and manufacturing techniques, even when hardware is involved.

The services so favored by Brad and his friends are usually intermediated by the internet, and would be much harder or impossible to offer without it. So if we are looking for guilty parties in the case of the movement from ownership to access, technology is a prime suspect.

Who is more free?

To the question of whether Brad, the access guy, is more free than Ben, the ownership guy, one might respond, free to what? And here we step into some deep philosophical waters.

Superficially, Brad looks a lot more free—no burdensome car or house payments or other long-term obligations (unless you count student loans), free to up and run off to Antigua or Bermuda or you name it for a vacation—the ideal young-urban-professional life. Only, if everybody in the country acts like Brad, with no wife or kids and no plans for same in the future, the country would die out in a generation. Something like this is already happening in Japan, whose population declined by 268,000 (0.2%) in 2014.

Even people Brad's age seem to have a sense that they are missing something that an earlier generation had, without knowing exactly what it is. I've been invited to the upcoming wedding of a Brad-generation couple who have erected an elaborate wedding website, complete with a list of things to do for out-of-town guests coming to Dallas. One of the items is a visit to a museum about the assassination of President Kennedy in 1963, and the prospective couple attached this curious comment to it: "As many of y'all know we were born in the wrong era." What does it mean when a whole generation thinks it was born in the wrong era?

To answer the question of human freedom, you must have some idea of what human beings are for. There are varying opinions on the purpose of human life. In 1992, as part of its decision in Planned Parenthood vs. Casey, the US Supreme Court regarded the core of liberty as the right to "define one’s own concept of existence, of meaning, of the universe, and of the mystery of human life.” That idea would be fine with Brad, whose concept of existence may change from year to year, or even month to month, as he ponders his next appealing experience.

But there are others who regard human beings as marked with the divine image. I came across a fine word the other day in a book by the English professor and translator of Dante, Anthony Esolen, Reclaiming Catholic Social Teaching. The word is "theomorphic," meaning "formed in the image of deity." Esolen says that "the right of private property is grounded, not in practical economics, but in the theomorphic nature of man." Because man is made in the image of God, anything that is a product of man's labor is owned, and ownership is something only humans can lay claim to.

And only people can choose whether to use their ownership of the fruits of their labor to live lives of superficial pleasure, spending their income on transient experiences and then ultimately passing out of existence, like Windows 98; or to found a family—either literally or by playing the role of father or mother to the younger generation—and serving those who come after us, passing the torch of human life and its best meanings to those who come after us.

Doing the latter requires a longer-term vision than the next expensive vacation. Those who work simply to enjoy the access to services provided by giant concentrations of ownership, are ultimately slaves to the owners of those service providers, whether it feels like slavery or not.

The classic image of this type of slavery is Aldous Huxley's dystopian novel Brave New World. But those who work not just for themselves, but to provide for others, using ownership as a means of providing for a real or metaphorical family—they are those who, while appearing to lose their lives in service to others, can actually save them.


Karl D. Stephan is a professor of electrical engineering at Texas State University in San Marcos, Texas. This article has been republished, with permission, from his blog, Engineering Ethics, which is a MercatorNet partner site.