A teacher has been stabbed to death in front of pupils inside a school in Leeds.

A 15-year-old boy was detained by teaching staff at Corpus Christi Catholic College and later arrested.

A pupil at the scene told the BBC that children were seen screaming and running from a classroom following the attack. 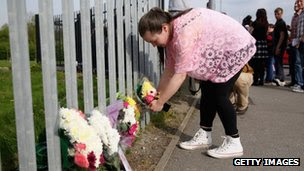 At a school well regarded by the pupils milling around outside, it seems none of them can quite believe the tragic events that unfolded today.

A student sits on the pavement in tears while others cautiously approach to lay the first of what is likely to be many floral tributes at the gates of Corpus Christi Catholic College in Leeds.

A distraught woman stands at the roadside, inconsolable at the loss of the teacher she called a friend.

Talking to those gathered at the Neville Road school, 17-year-old Aine Arnold summed up the feeling amongst her peers.

"She was lovely, I can't believe that anyone wanted to do something so horrible."

Ch Supt Paul Money of West Yorkshire Police said the victim received a number of stab wounds and a knife was recovered from the scene.

He said the 15-year-old pupil was detained by other teaching staff and arrested in connection with the stabbing.

"The incident itself was over very quickly and no other pupils or staff were threatened or injured. However this has clearly been a very traumatic situation for those involved," Mr Money said.

He said the attack was an "unprecedented event" and schools in Leeds were "generally very safe places" to work and study.