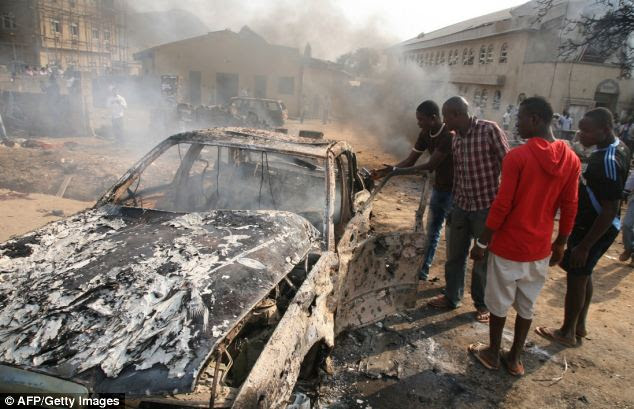 The terrorists, thought to be from Boko Haram, set a locked hostel on fire, before shooting and slitting the throats of those who tried to climb out the windows. Some were burned alive.

Adamu Garba said he and other teachers who ran away through the bush estimate 40 students died in the assault that began around 2 a.m. Tuesday at the Federal Government College at Buni Yadi.

Boko Haram have been responsible for a number of terrorist attacks in the north of Nigera as they increasingly target civilians.

It is a co-ed school about 45 miles south of Damaturu, the capital of Yobe state, and difficult to communicate with because extremists last year destroyed the cell phone tower there.

Garba, who teaches at a secondary school attached to the college, said the attackers first set ablaze the college administrative block, then moved to the hostels, where they locked students in and started firebombing the buildings.

At one hostel, he said: 'Students were trying to climb out of the windows and they were slaughtered like sheep by the terrorists who slit their throats. Others who ran were gunned down.'

He said students who could not escape were burned alive.