Egypt: Where is Justice for Coptic Citizens?

Formerly viewed as the heroes of Tahrir Square, the brutal attack of the military on the Copts has changed that perception. Read more here. 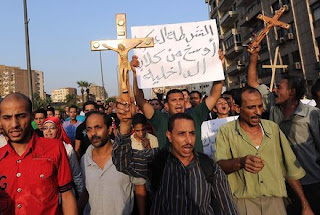 SOURCE: Cairo Institute for Human Rights Studies, 16 October 2011 - The undersigned organizations condemn the unprecedented extrajudicial killings and acts of violence committed by military police and central security forces on 9 October 2011 in the Maspero area and central Cairo. Peaceful protesters demanding rights for Coptic citizens were attacked, resulting in at least 25 deaths and 300 injuries, some critical. We further condemn the arrest of an unknown number of demonstrators and their referral to a military tribunal for investigation. We call for an independent investigation committee, and categorically reject any investigation by the military prosecutor, as it is a part of the military establishment charged with the killing and wounding of demonstrators, and cannot therefore serve as a neutral party to the case.


The demonstration consisted of a peaceful march, which began in Shubra at around 4 p.m., and a silent protest outside the state television building. The demonstrators were protesting against the demolition of the Church of St. George, in the village of Al-Marinab in Edfu District, Aswan Governorate, as well as against the complicity of the Governor of Aswan and security forces in the demolition. The church, which had been carrying out religious services for eighty years, was destroyed on the pretext that it did not have a licence, an argument increasingly used by some extremist Muslim groups to justify attacks on churches. Rather than deterring such crimes by enforcing the law and punishing the instigators and perpetrators, the authorities have borrowed the methods of the ousted Mubarak regime. In an open violation of the law, security services persist in holding "traditional" reconciliation meetings in which victims are denied their rights and criminals escape punishment. As such extremists have come to realize that they will not be held accountable by the authorities.


According to video footage and eyewitness testimonies from Maspero, military police and central security force personnel dispersed protesters by opening fire and by using military vehicles to run them down.


The events took a final turn at around 9 p.m. when people in civilian clothing joined the army assault on protesters. A large number of witnesses stated that these people were Muslims from the areas of Bulaq Abul Ela and Ghamra. The army and police continued to fire teargas and bullets late into the evening, and the hit and run attacks also continued. In addition, the military police arrested a number of people, who were then to be detained for 15 days pending investigation.


We also condemn the storming of the offices of the satellite TV channels Al-Hurra and 25 January TV by teams of military police during the Maspero events, cutting off their live broadcasts. We condemn the inflammatory role played by the official state media. A direct link can be traced between the outright incitement against demonstrators by state media and the events at Maspero - to say nothing of the subsequent sectarian clashes which took place between demonstrators and residents from the surrounding areas. Official state television threw professionalism to the wind and reported that Coptic demonstrators had opened fire on soldiers, killing three and wounding others, without referring to the victims amongst the demonstrators, who were completely ignored. State media broadcast an inflammatory appeal to Egyptian citizens to take to the streets and protect the army from "attacks by Coptic demonstrators."


Monday morning saw a joint meeting between the Supreme Council of the Armed Forces and the transitional government to discuss what had happened at Maspero. This led to a declaration by the Military Council tasking the Cabinet with the formation of an investigatory committee. It must be noted that over the past few months both SCAF and the transitional government have failed to reach any conclusions in a string of official investigations. These range from the virginity tests inflicted on Egyptian women arrested in Tahrir Square, to the dispersal of those gathered in Tahrir Square on April 9th 2011 during which several were killed, to the killing of Rami Fakhry at an army checkpoint on the Cairo to Ismailiyah road, to what happened at Nour Mosque in Abbassiyah on the evening of July 23rd, 2011, which led to the death of Mohamed Mohsen.


The undersigned organizations are deeply skeptical of all of the investigations announced by SCAF since it took power. We also emphasize our disappointment at the lack of a speech by the Prime Minister, and at the press conference held by SCAF, during which they took least possible of responsibility for this heinous crime. Both SCAF and the government were keen to describe the killings as clashes between Muslims and Christians, along with unidentified ’foreign elements’. Both ignored the involvement of the armed forces, whose direct responsibility for the killing of civilians was evidenced by eyewitnesses and television cameras. SCAF, rather than opening an investigation into the official media’s coverage of the events, instead praised its neutrality. It ignored the media’s culpability in calling on citizens to take to the streets and protect the army, which constituted direct incitement of sectarian clashes. This confirms the unwillingness of both SCAF and the government to break with the policies of Mubarak’s security regime, which exacerbated the problem of sectarianism and made religious minorities, along with their property and places of worship, into targets for various forms of attacks without fear of consequences.


Therefore, the undersigned organizations reject the fact-finding committee established by the Cabinet, and demand the following:


The scenes of the 9th October are a reminder of events still fresh in the minds of Egyptians. Yet the extent of the violence, its sectarian nature, and the unprecedented degree of media incitement, threaten to exacerbate the ongoing crisis of sectarian violence, which has been documented by the reports and recommendations of the National Council for Human Rights and other independent bodies. These bodies have conducted a number of investigations in previous cases of sectarian violence. A number of recommendations, which have been ignored by authorities both past and present, have stated that the solution begins with the state. The state can still defuse the crisis of sectarian violence and save the country from the threat of civil war looming on the horizon. Yet the necessary political will must exist. The state must adopt policies which uphold and respect the rule of ordinary (not extraordinary) law, which do not discriminate between citizens, and which establish the values of citizenship and the foundations of justice and equality.

6- Egyptian Foundation for the Advancement of the Conditions of Childhood.

7- Association for Freedom of Thought and Expression.

9- Nadeem Centre for the Rehabilitation of Victims of Violence and Torture.

20- Human Rights Association for the Assistance of Prisoners.