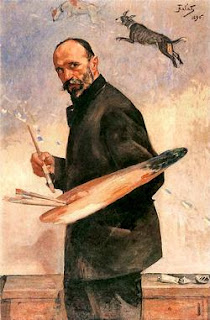 NEW YORK (AP) - U.S. authorities say they've seized two paintings in New York that were stolen from the National Museum in Warsaw, Poland, by the Nazis during World War II.

The paintings by 19th-century Polish artist Julian Falat were seized last Wednesday. Federal prosecutors also filed court papers aimed at recovering the paintings, "Off to the Hunt" and "The Hunt."

Prosecutors say the paintings remained missing after World War II. Polish authorities alerted U.S. authorities in 2006 that both were about to be sold at auction in New York.

In a lawsuit, the U.S. government says the paintings can be seized because they constituted stolen property imported into the United States illegally.

(Copyright 2010 by The Associated Press. All Rights Reserved.)
Posted by Alice C. Linsley at 2:45 PM