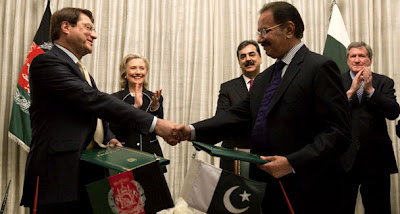 ISLAMABAD: Pakistan will provide a ‘side letter’ to Afghanistan for Indian exports to the war-torn country in future trade arrangements under the US-facilitated Afghan-Pakistan transit trade agreement (APTTA) signed on Sunday.

The two sides agreed that “no Indian exports to Afghanistan will be allowed through Wagah at this stage”. However, a feasible proposal in this regard can be discussed at an appropriate time in future.

“Pakistan will provide a side letter to Afghanistan giving this understanding. The side letter shall not be part of the APTTA,” according to a ‘record note’ signed by commerce and trade ministers of the two countries, a copy of which was obtained by Dawn.

The agreement required Pakistan to facilitate Afghan exports to India through Wagah. Afghan trucks will be allowed access to designated route up to Wagah. “Afghan cargo will be transferred back to back on Indian trucks at Wagah,” it said.

Some analysts were of the opinion that “back to back transfer of Afghan cargo on Indian trucks” also meant that Afghanistan could purchase Indian goods and then transfer these through trucks to Kabul.

“This is not the case,” commerce secretary Zafar Mehmood said. He told Dawn: “India will not be able to export its products or goods to Afghanistan under the current arrangement.”

He said Pakistan’s trade with India was a bilateral issue. Neither Islamabad had given the most favoured nation status to New Delhi nor did trade with India take place through Wagah, except for some items on which decisions were taken on a case-to-case basis, he added.

Asked if Pakistan and Afghanistan had finalised any timeline for Indian exports to Kabul for which Islamabad would provide a ‘side letter’ outside the APTTA, Mr Mehmood said the indication referred to a possible future scenario in which case India and Pakistan might be able to reach an understanding to start bilateral trade. “This is a non-binding understanding under which any feasible proposal can be discussed at an appropriate time in future.”

An official said assuming that Islamabad and New Delhi resolved their bilateral issues and started trade, it would not be difficult to dovetail this trade with Afghanistan under the said clause and Pakistan would simply issue a side letter to Afghanistan.

Asked about the difference between the fresh APTTA and the 1965 Afghan transit trade agreement, Mr Mehmood said the new agreement provided a major concession to Afghanistan to use its own trucks to carry export goods to India through the Wagah border. This was not allowed under the old agreement.

He said that Afghanistan’s major exports like fresh vegetables, fruit and dry fruits perished through sea routes because of longer transportation time. “That will be a big benefit for Afghanistan.”

The secretary said that under the new arrangement, Pakistan would be able to combat unauthorised trade and smuggling because goods would now be transported through containers of international specifications and under verifiable standards of sealable trucks to be monitored through tracking devices installed on transport units or trucks.

He said that Afghan goods would be subject to full customs duties to be charged at the import stage in Karachi or Lahore and reimbursed to Afghan traders after the consignment reached its destination.

In reply to a question, Mr Mehmood said the current ATTA mostly took place through the National Logistic Cell, which would lose its monopoly and revenue as well, but it was illogical not to allow Afghans to use their own trucks for their own trade. He said he did not see a big deal in allowing Afghan trucks to transport Pakistani goods within its cities on their return after offloading at Wagah.

Some observers said the ‘record note’ did not envisage physical examination of goods to be transported onboard Afghan trucks which was a main concern. For example, they said, it would not be known to Pakistani authorities whether Afghan trucks were carrying vegetables and fruit or drugs and ammunition.

They said that since the entire trade would depend on “customs to customs information sharing (IT data and others)”, it was practically impossible to verify exactly what products were passing through Pakistani soil given the general reputation of revenue authorities and the fact that most products imported under the old ATTA made their way into Pakistani markets.

These technical details required further discussion before the formal signing of the new agreement, they added.